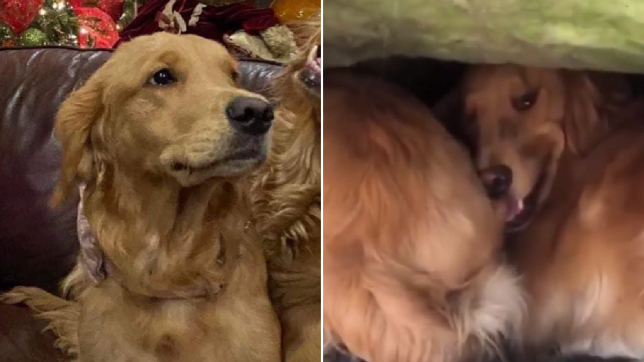 Brandy the golden retriever puppy got stuck under a huge boulder for 20 hours-with her mother Bailey coming to the rescue after picking up her pup’s scent (Pictures: PAHomepage/Pennsylvania)

A mother golden retriever led firefighters to her puppy after the pup got stuck under a huge boulder and lay trapped for 20 hours. The older dog, called Bailey, picked up daughter Brandy’s scent after the eight month-old puppy vanished from her home in Lake Winola, Pennsylvania, on Sunday.

Bailey helped save the day after Brandy’s frantic owner Nadia Delicati raised the alarm on social media, and spent hours looking for her pet. After Bailey led firefighter to Brandy, they were confronted with a heartbreaking sight – the puppy was wedged under a boulder and unable to move.

She had gone into a cave, and gotten her head stuck in a gap so small she was unable to bark for help. Volunteer firefighter Nate Evans explained: ‘When we got on scene, we found out the dog was actually in a cave, with its head stuck in a hole.

‘She was there for a while. She was definitely hungry; she was definitely cold.’ Rescuers were unable to dig Brandy out, so they used chisels and sledgehammers to gradually break away at the boulder in a bid to free the puppy.

Another volunteer firefighter, Eric Coolbaugh, recalled the moment they finally managed to pry Brandy free. He told PAHomepage: ‘I was able to take a pry bar between the two rocks that had her by the head, put all my weight into it, lifted just enough that her head popped out.

‘Couldn’t believe it but it worked out really well.’ Despite spending 20 hours under the rock, Brandy appeared unscathed – and ran straight to owner Nadia on being freed.

Tunkhannock Township Police Officer Timothy McCoy said the reunion ‘was like a scene out of a movie.’

Brandy then went to ‘thank’ her rescuers one by one, by showering them with affection. The dog suffered a swollen paw, hunger and exhaustion, but is otherwise unscathed.

Nadia has since issued a heartfelt thanks to everyone who helped save Brandy from a potentially awful fate.