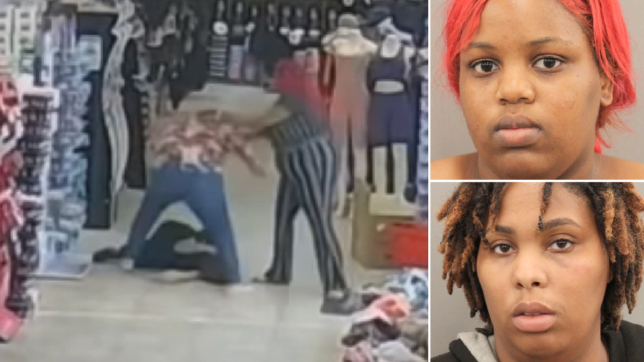 Jung Kim had her nose broken by two women at her beauty shop in Houston, Texas, with Daquesha Williams (top left) and Keaundra Young (bottom right) charged with the killings (Pictures: Click2Houston)

A pair of women were filmed breaking an Asian haircare shop owner’s nose while allegedly hurling racist slurs at her. Jung Kim was thrown to the floor, punched and kicked after asking five customers to leave her store in Houston, Texas, after they knocked over wig displays.

The women ignored her, and deliberately knocked over other displays. They then began beating Kim, with the victim suffering a broken nose that now requires surgery. Her son Sung Jun Lee said afterwards: ‘They started saying something like some racial words like, “Asian people shouldn’t be in the black market.”

‘We’re stealing their money.’ Lee said Kim was branded ‘You little Asian girl’ by her attackers, and said she has been left badly-shaken by the attack. He added: ‘We never thought this would happen to us.’ A photograph snapped in the aftermath showed Kim with blood dripping down her face.

Keaundra Young and Daquiesha Williams were arrested afterwards on suspicion of attacking Lee. Young faces an aggravated assault charge, while Williams has been charged with assault, Click2Houston reported.

Racist attacks on Asian people have rocketed in the US since the outbreak of Covid. Former President Donald Trump was accused of stoking hate after repeatedly referring to Covid as the ‘China virus.’

And last week eight people were killed – six of them Asian women – at three shootings at Atlanta-area massage parlors. Alleged gunman Robert Long, 21, is said to have blamed the shootings on his sex addiction, and claimed he targeted the business to ‘eliminate temptation.’

Investigators say there is currently no evidence that those shootings were motivated by racism, but campaigners say it shows further evidence of the dangers Asian Americans increasingly face.