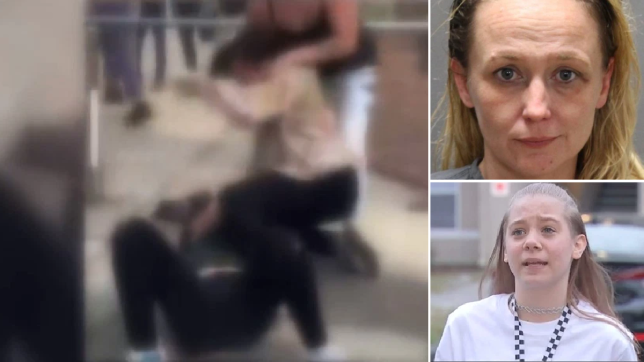 Cell phone footage shows the moment that a mother and another adult allegedly wearing boxing gloves punched a 12 year-old child. In the video clip shared on Instagram, the girl – said to be an enemy of the mom’s daughter – was surrounded by a woman, a man and students.

The disturbing clip from Dupont Middle School in Jacksonville, Florida, last week emerged as a mother, Edith Riddle, 34, was arrested for allegedly attacking the girl for meeting with her daughter and the vice principal.

It is not clear from the video who the people attacking the girl on the ground are, or whether they are wearing boxing gloves.

Riddle, a man and a Terry Parker High School student went to the middle school after the suspect’s daughter got upset over an issue involving the victim, according to Action News Jax.

Riddle and the man claimed the boxing gloves were ‘superglued’ to their hands, according to a Jacksonville Sheriff’s Office arrest report.

After suspect’s daughter saw the victim and darted towards her, Riddle joined the fight and stood on the victim’s hair as she lay on the pavement and punched her several times in the head, according to the report.

The victim’s mother Crystal Wiltsee was in disbelief over how the two adults were allowed on campus and blamed not only the suspect.

‘The school is to blame just as much as her, because had they escorted the lady off the property when they showed up to the school in boxing gloves – that’s not normal,’ Wiltsee said.

Wiltsee’s daughter was taken to a hospital for evaluation.

The daughter later told Action News Jax that she felt ‘scared most of the time.’

Riddle was detained last Thursday following the incident and charged with one count of child abuse using a special weapon. It was not immediately known if the man accompanying her also faces charges.