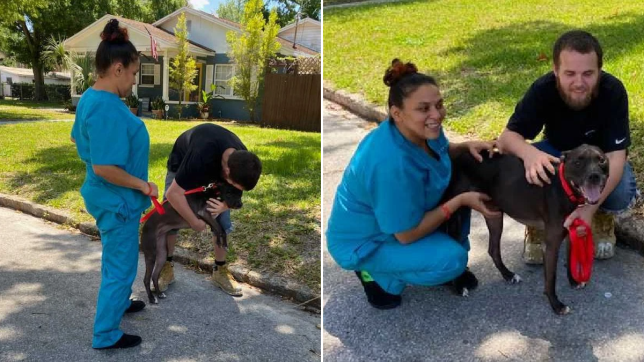 A dog and her former owner reunited after he found a new job and home and could again take care of her (Pictures: Humane Society of Tampa Bay)

A man who gave up his dog to the humane society because he lost his job and became homeless got his act together – and was able to get back together with his beloved pup.

Dakota’s dad brought her to the Humane Society of Tampa Bay in Florida after losing his job and in turn his home.

‘It was excruciating for Dakota’s dad to give her to us, but he’d fallen on very difficult times and become homeless. He loved her dearly but knew he couldn’t care for her properly,’ the humane society shared in Facebook post on Tuesday. ‘Wanting the best for her, he brought her to us in hopes that she’d find a better life.’

Dakota was a ‘wonderful, friendly dog,’ but strangely no one adopted her. It turned out to be act of fate.

‘For weeks she waited and waited, and then today, a phone call,’ the humane society wrote in the post. ‘Her dad had gotten a job, found a new home and was calling us on the very slim chance that we still had his best girl.’

The moment that Dakota and her rightful owner reunited was special.

‘When we brought Dakota to her dad she absolutely squealed with delight and ran straight into his arms,’ the humane society wrote.

The feeling was mutual.

‘The young man was so overwhelmed with emotion that he began to cry,’ the humane society wrote. ‘Let’s be real, so did we! It was a very heartwarming moment.’

Dakota’s dad has remained anonymous, but the humane society shared photos of him embracing his furry friend during the joyous reunion.

The humane society was so touched by Dakota and her dad that the organization gave them a new leash and collar as well as six months of preventive medications.

‘We know getting back on your feet is a process,’ the humane society wrote. ‘Dakota’s smile is all the thanks we need.’

The CDC’s Outdoor Mask Guidelines Are Too Timid

Girl, 11, sexually assaulted on her way to dance class as cops launch manhunt for sex attacker who grabbed her