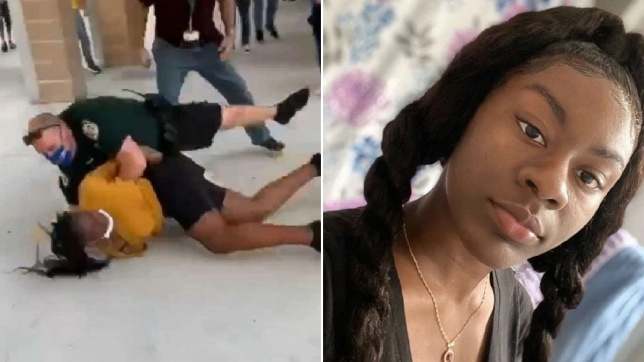 This is the shocking moment a 16-year-old girl was knocked unconscious when she was bodyslammed to the ground by a school guard.

Taylor Bracey, 16, a student in Kissimmee, Florida, is suffering from ‘memory loss, headaches and blurry vision’ after she was caught on camera being slammed into the concrete by a school resource officer – a cop whose job it is to patrol a school.

Her mother, Jamesha Bracey, has said her daughter has been left ‘traumatized’ by the incident at Liberty High School last week, and has called for the officer to be held accountable.

The video footage of what happened show deputy Ethan Fournier – whose job it is to keep students safe – throwing Taylor to the ground as he ‘tries to break up a fight’.

Fouriner, an employee of Osceola County Sheriff’s Office, has been placed on leave and a police in Florida have launched a criminal investigation into what happened.

Taylor’s mom, Jamesha, said: ‘She’s depressed, I’m depressed. We all are traumatized about what happened.

‘I think, if this was a white girl, would this have happened to the white child?.

Jamesha added: ‘He’s supposed to be trained. It’s foreseeable that children may get in altercations at school.

‘You’re not supposed to knock them unconscious. You’re supposed to be the person who knows how to de-escalate the situation, it’s just mind-boggling.

‘This is the adultification of black children, that our children are seen as adults. No, no, this was a child.’ 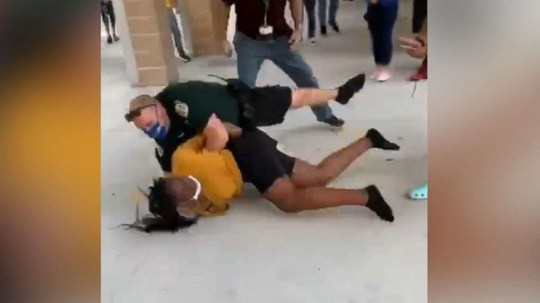 The incident happened on Tuesday in the school’s hallway, as Fournier was attempting to break up a fight between Taylor and another student, according to the Osceola County Sheriff’s Office.

‘The student was not complying with lawful commands’, Sheriff Marcos Lopez said during a press briefing.

In video of the incident, after Taylor’s head thumps on the concrete floor, Fournier can then be seen handcuffing the teenager while she was knocked out.

According to Crump, Fournier did not render aid. Taylor received medical attention at the scene, Lopez said.

The sheriff’s office handed a criminal investigation of the deputy over to the Florida Department of Law Enforcement ‘to make sure that this is completely independent of our agency’, Lopez added. 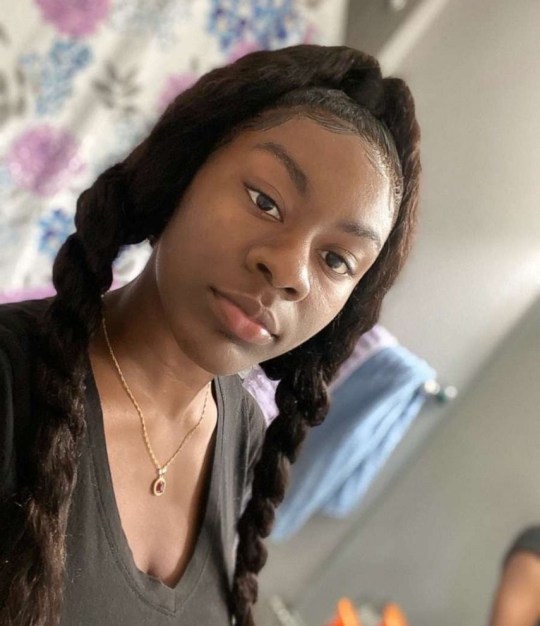 ‘We want to make sure it’s a complete, thorough investigation without my influence in this case.’

Fournier has been placed on paid administrative leave pending the outcome of the investigation and Lopez said the officer does not have a history of misconduct other than ‘minor property damage’.

Osceola School District spokesperson Dana Schafer, said: ‘It has been a difficult week for Liberty High students and staff.

‘The entire staff and administration of Liberty High School remain committed to ensuring that we have a safe and positive learning environment for all students.’

School resource officers like Fournier are not school district employees but are instead employed through their law enforcement agency, she added.

Community leaders and Taylor’s family have called for Fournier to be fired and banned from working as a school resource officer elsewhere in the future.

The family’s lawyer, Ben Crump said they are still considering when Taylor should go back to school.

He said: ‘That will be a family decision, but think about it, you’re going to send your daughter back to the school that has a school resource officer that was supposed to protect her, but body-slammed her and knocked her unconscious.

‘As a parent, how confident do you feel sending your child back to that environment?’

Elon Musk reveals the one interview question he ALWAYS asks