Travelers on standby for a flight got into a literal fight over the last seats on a plane over the weekend – and the punches and kicks were caught on video by a bystander.

The brawl broke out near gate D14 of the American Airlines terminal at Miami International Airport on Sunday afternoon. A witness told Local 10 News that seven people were involved in the argument over airplane seats.

A more than minute-and-a-half-long video shared by Twitter user @Dolphinfan201 showed four people in a fist fight by a ticket counter and the other three beating each other by a row of seats.

People could be heard calling on the participants to stop the drama and one apparent bystander stepped in to break up the fight by the counter where a couple of people were kicking and punching two others on the ground. 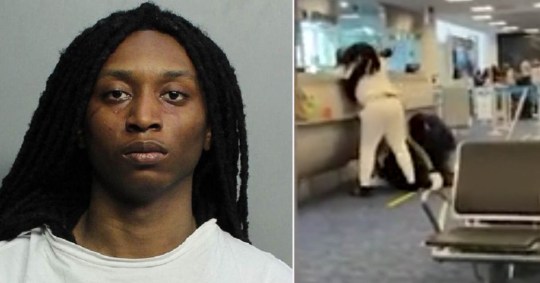 Jameel Tremain Decquir, 20, was arrested after a brawl broke out at airport terminal over the remaining standby seats (Pictures: Miami-Dade Corrections & Rehabilitation/Twitter)

The intervention helped only momentarily, as some of the fighters by the counter got into another scuffle by the seats closer to the other group in a tangle. At that point, security guards arrived and separated the bad actors.

Jameel Tremain Decquir, 20, was arrested for disorderly conduct, according to the Miami-Dade Police Department, and three other suspects remain at large.

Decquir and three other people were waiting to board the flight to Chicago but were told by an American Airlines agent at the gate that there were only three standby seats left, his arrest report states. The agent told the group of four that they could leave one person behind or wait together for another flight.

For reasons unknown to police, the group of four began pounding three other people who also stood at the counter. Decquir punched a victim in the face as the victim turned away from the counter, according to the arrest report. One of the male victims covered a female on the ground to protect her from punching and kicking, officials said. 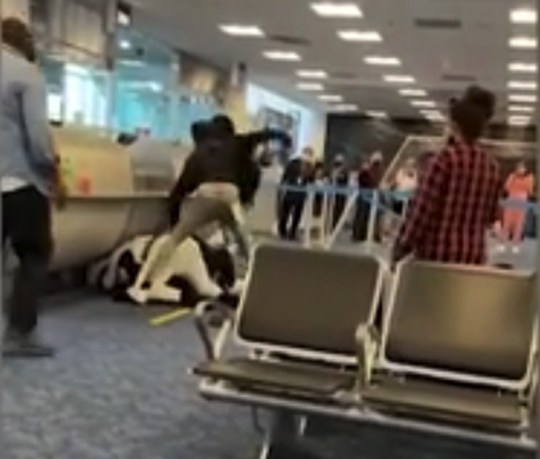 A group of four people punched and kicked each other by a ticket counter at Miami International Airport (Picture: Twitter @Dolphinfan201)

The victims said they did not know why they were attacked and did not press charges, according to authorities. They sustained minor injuries.

It was not clear what logic the group of four had in beating the three, as preventing them from getting on the plane would not have made a fourth seat available.

Meghan and Harry: How couple celebrated second Thanksgiving in US