An outraged father was filmed calling teachers ‘cowards’ and accusing them of ‘hiding behind our children’ for not letting kids return to in-person classes.

In a video that has since gone viral, the irate parent from Loundon County, Virginia, told a meeting that the local school board should ‘all be fired’ from their jobs for the continued closure of schools due to Covid.

The unnamed dad spoke at a Loudoun County School Board meeting last week and began shouting when he burst into an impassioned rant about the closures.

He said: ‘You should all be fired from your day jobs because if your employers knew that you were more inefficient than the DMV, you would be replaced in a heartbeat.

‘You’re a bunch of cowards hiding behind our children to keep schools closed. The statistics do not lie that the majority of the population are not at risk from this virus.

Like most schools across the US, classrooms in Loudoun County have been closed since the Covid pandemic began in March. This has meant many parents have had to juggle full-time jobs with homeschooling grounded children.

The school district has not yet finalized a date for a return to in-person learning for students and at last week’s meeting, the masked and unnamed father expresses his frustration the situation. 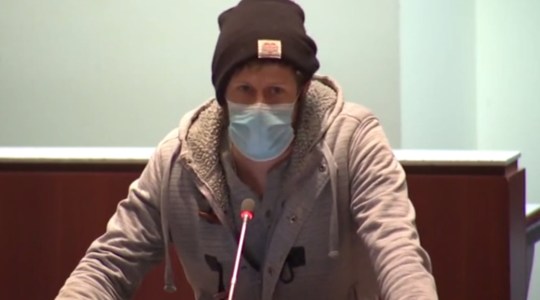 The angry parent spoke at a school board meeting (Picture: Fox 8)

‘The garbage men who pick up my trash risk their lives every day more than anyone in this school system,’ he continued.

As he raised his voice and point fingers at the members of the school board he added: ‘Figure it out or get off the podium.

‘Because do you know what? There are people like me and a line of other people who will gladly take your seat and figure out. It’s not a high bar, raise the frigging bar.’

School re-openings have triggered one of the most heated debates since the Covid pandemic began.

Teachers and other staff say it is impossible to impose social distancing in schools, and that many of them have underlying illnesses that put them at risk of a bad infection, or care for vulnerable people they do not wish to pass the virus on to.

Meanwhile, parents have been left frustrated at having to try and juggle work and homeschooling. And experts have warned of the emotional toll being so isolated has taken on children.

Clark County in Nevada – which includes the city of Las Vegas – is rushing to reopen schools for in-person learning after seeing the number of student suicides double in a year.

Since the pandemic began the US has recorded 26.5 million cases of Covid and has registered 450,000 deaths from the virus.