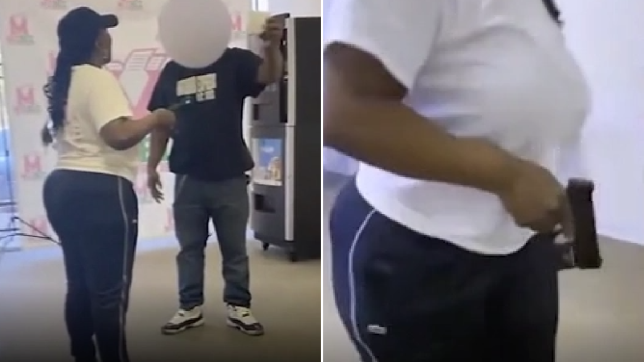 Latunya Wright brandished a gun at a customer who came in to complain about how she’d filed his tax return – then grabbed another woman’s iPhone (Pictures: KTRK)

This is the jaw-dropping moment an accountant brandished a gun at customers who complained about their tax returns. Latunya Wright was filmed cocking the pistol at a man who came in to complain about his tax refund at a financial services firm called Mz Biz in Houston, Texas, where Wright works.

Last Thursday’s incident was recorded by another customer, Marquita Boyle, who arrived with her own complaint about her tax return. She filmed Wright snatching her phone off her as screams rang out, with the tax preparer arrested by police shortly after the drama escalated.

Boyle said Wright threw her iPhone into a filing cabinet, and tried to delete images of her brandishing the gun – only for Boyle to later recover the clip. She began recording after Wright initially brandished the gun, over fears about what might happen to the customer who arrived to complain.

Boyle was later taken to hospital by ambulance, and says she is still struggling to correct the errors with her tax return, KTRK reported.

Wright is now behind bars at Harris County Jail facing charges including aggravated robbery and assault.

She was previously sentenced to four years prison in 2014 after taking part in a multi-million dollar ATM heist.

The business where last week’s confrontation was filmed has since closed.