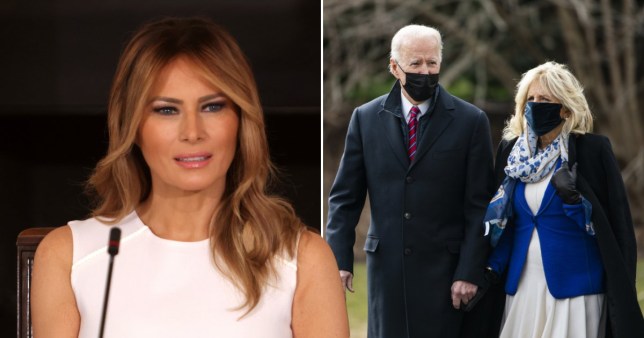 Former US first lady Melania Trump has been left ‘jealous’ of her successor Jill Biden’s popularity in the press.

While former president Donald Trump was cleared of inciting the deadly US Capitol riots on Saturday, his wife is said to be ‘bitter and chilly’ towards him after their exit from the White House.

Sources told CNN the former model is lamenting the positive media focus on Mrs Biden, who was pictured alongside her husband on the cover of People magazine last week.

The couple also recorded a message broadcast before the Super Bowl last weekend.

‘Melania intentionally didn’t do press as a defence mechanism,’ she said, ‘She and I would always discuss this reasoning and that’s why everything was choreographed or emailed, or be “approved” quotes or statements that I would often write.’

Mrs Trump deliberately kept a low profile and turned down interviews – but is now apparently second-guessing that tactic and blaming others.

She left the White House with the lowest ever popularity rating for a first lady in polling history. 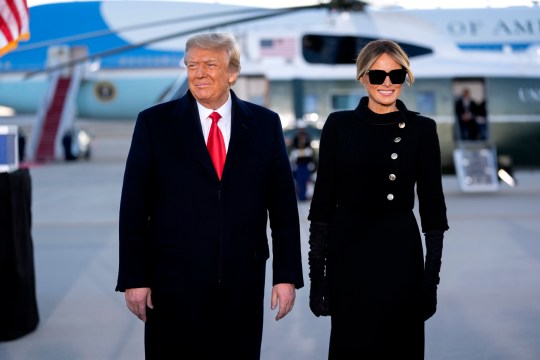 Donald Trump’s wife is said to be ‘bitter and chilly’ towards him after their exit from the White House (Picture: Pool via CNP / Mega)

Some of her staff quit over the US Capitol riots and she also didn’t write her own thank you notes before stepping down as first lady.

Mrs Trump did not give Mrs Biden a tour of the White House, which is a longstanding tradition between outgoing and incoming first ladies, and the two have reportedly not spoken.

At the end of the presidency the couple returned to Florida with their 14-year-old son – but not everyone welcomed them.

Sources also added Mrs Trump has returned to a life free of politics and the Congress.

‘It’s pretty much the same as it was before [she was first lady] or even when she would come down during vacations,” another added.

Mrs Trump is reportedly setting up a new office and hopes to resume her Be Best campaign of helping children.