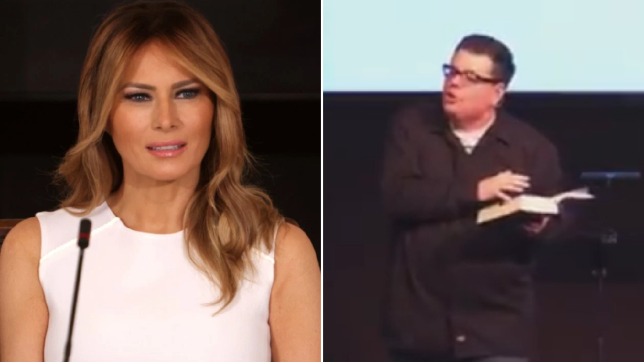 A Melania Trump-obsessed pastor has been suspended for telling female churchgoers to eat less, offer their husbands more sex, and be less butch. Stewart-Allen Clark spent 22 minutes ranting at the Malden First General Baptist Church in Malden, Missouri on February 28.

He said: ‘Now look, I’m not saying that every woman can be the epic trophy wife of all time like Melania Trump. All I can say is not everybody looks like that, amen? But you don’t need to look like a butch either!’

Clark continued: ‘Why is it so many times that women, after they get married, let themselves go? Scientists have discovered, by the way, a food that diminishes the woman’s sex drive. It’s called the “wedding cake.”‘

The scandal-hit pastor went on to claim men whose wives ‘let themselves go’ were entitled to ogle other women. He said: ‘Ladies, it’s the way God made us. It’s the way we are. Men are going to look. He made us to look. You want them to be looking at you. Don’t let yourself go.’

His diatribe was recorded by parishioner Reagan Williams, who was so disgusted she shared the clip on her Facebook profile after, where it has been viewed thousands of times.

Reagan wrote: ‘As far as I know, this isn’t his first time doing this. According to someone whose family members attended his last Mother’s Day sermon, they walked out because his message was worse than this, and toxic and degrading.’

The appalled churchgoer’s decision to share Clark’s antics saw him suspended from the church – and ordered to seek help for his behavior.

A church spokesman said: ‘As of March 2, 2021, Pastor Stewart-Allen Clark has taken a leave of absence and is seeking professional counseling.’

The General Baptist church has also sought to distance itself from Clark, with its governing body saying his slurs ‘are not consistent with the positions and values of General Baptists.’