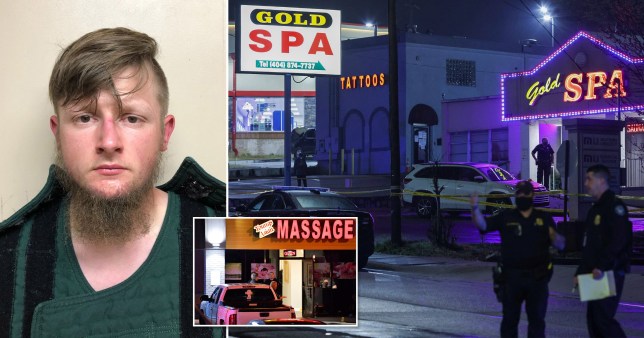 A suspected murderer arrested for killing eight people at three massage parlors was a sex addict who was trying to ‘eliminate temptation,’ police say. Cherokee County Sheriff’s Office said Wednesday that Robert Aaron Long, 21, may have targeted the businesses to ‘eliminate a source of temptation’ he had taken advantage of. Long has since been charged with four murders.

Long is said to have told deputies that he was a frequent visitor to massage parlors for sexual services, and that he had decided to stop himself or anyone else doing the same thing again in the future.

Detectives also refused to say whether either of the two businesses targeted had previously been visited by Long, and whether they offered sexual services to customers. 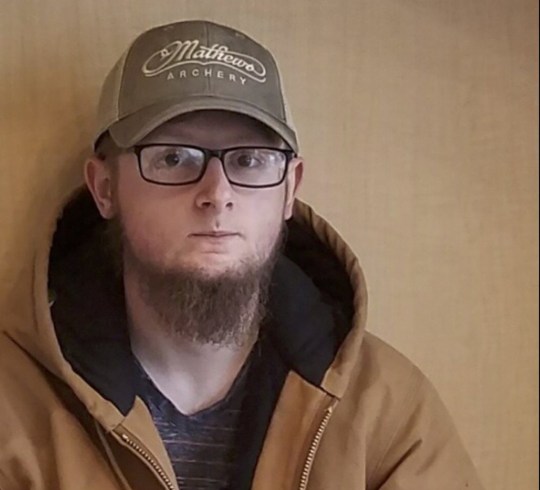 Long was apprehended by cops after carrying out shootings at three massage parlors, killing eight, it is claimed (Picture: Cherokee County Sheriff’s Office)

Long was apprehended while en route to carry out further killings in neighboring Florida, it is claimed. He is being held without bond on suspicion of eight counts of murder.

His alleged rampage began on Tuesday evening when five were shot at Youngs Asian Massage Parlor in Woodstock, 30 miles north of Atlanta.

Two died at the scene, with another two victims later dying in hospital.

An hour later, Long is said to have begun shooting at Gold Spa in Atlanta’s Buckhead area, before opening fire at Aromatherapy Spa across the street. 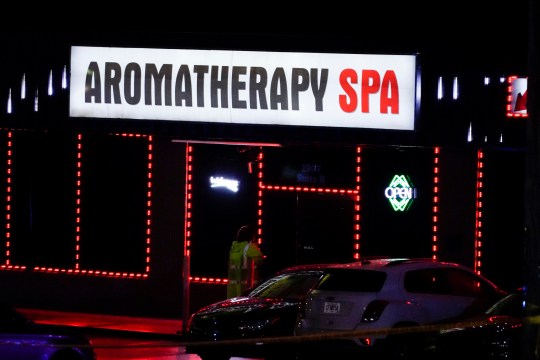 Aromatherapy Spa, pictured, was the third massage parlor targeted, with one woman found dead there after the shooting (Picture: AP)

Three women died at Gold Spa, with another female victim killed at Aromatherapy.

Police said it was too early to say whether the crimes were motivated by racial hatred, with six of those gunned down later identified as Asian women.

Asian-Americans have been hit by a rise in hate crimes during the Covid pandemic, with Georgia State Representative Bee Nguyen saying: ‘It’s hard to think its not targeted specifically toward our community.’

Asian Americans Advancing Justice’s Atlanta chapter said: ‘We are heartbroken by these acts of violence.

‘While the details of the shootings are still emerging, the broader context cannot be ignored.

‘The shootings happened under the trauma of increasing violence against Asian Americans nationwide, fueled by white supremacy and systemic racism.’