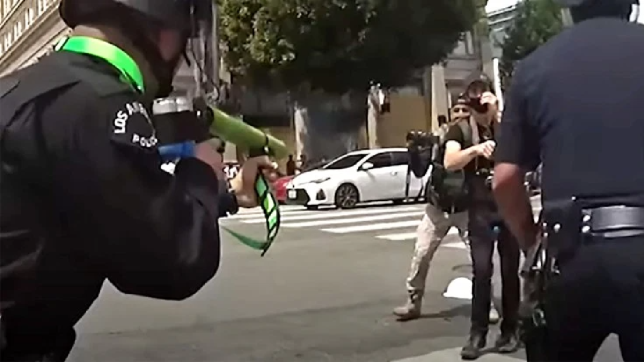 Ben Montemayor has filed a federal lawsuit against the chief of police in Los Angeles (Picture: LAPD)

A man’s testicle exploded after being hit by a rubber bullet during a protest against police brutality.

Ben Montemayor, 29, has filed a lawsuit against the chief of police in Los Angeles claiming cops used ‘excessive force’ and violated his constitutional rights when an officer shot him during a demonstration in the city last summer.

The federal suit, which was submitted on Monday, alleges that Montemayor’s right testicle swelled to the size of a grapefruit and had to be pieced back together by doctors after a ‘high-speed plastic, hard foam projectile’ hit him in the groin.

Montemayor’s legal claim names the city and LAPD chief, Michel Moore, as defendants, and challenges a finding by the department’s use of force review board that the officer was in policy when he shot Montemayor in June 2020, reports the Los Angeles Times.

Speaking to the paper, Montemayor said he hoped his case, which seeks an unspecified amount of damages, helps to hold the LAPD accountable and protect future protesters.

‘I don’t want them to be downplayed.’

Back in June, Montemayor was holding a large sign calling for the LAPD to be defunded when officers in riot gear began advancing. According to his lawsuit, Montemayor had not heard a dispersal order but argues he was still walking in the direction he believed police wanted demonstrators to head in.

The court document says that’s when two officers rushed forward, ripped the sign from his hands and shoved him backward.

‘As Mr. Montemayor stood there, unarmed, not resisting arrest, posing no threat whatsoever to anyone around him, and having just been violently shoved, a third officer less than ten feet away aimed his green (40-millimeter) launcher at Mr Montemayor and intentionally shot him in the groin with a high-speed plastic, hard foam projectile’, the lawsuit states.

Police body-camera footage from the incident, which has been released publicly, shows an officer shoving Montemayor backward as he raises his hands. The officer can then be seen shooting him in the groin.

LAPD policy outlines that officers should only target protesters with such projectiles if they represent a physical threat to officers, not simply for failing to comply with a dispersal order. 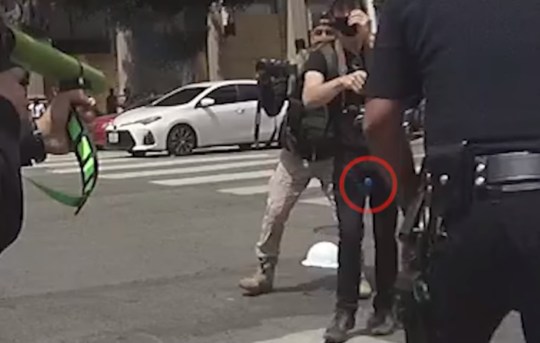 The rubber projectile hit him in the groin (Picture: LAPD)

After being shot, both of Montemayor’s testicles immediately swelled, the right one growing to the size of a grapefruit, his lawsuit states. Doctors at a nearby emergency room performed a scrotal ultrasound, and after telling Montemayor that he was at risk of losing his testicles, rushed him into surgery.

He then underwent an operation which involved ‘piecing back together portions of his testicle which had exploded’, the lawsuit alleges.

Since the shooting, Montemayor claims he has undergone physical therapy and still suffers from emotional distress and trauma, the suit claims. It says he has ‘flashbacks of being attacked’ whenever he sees police officers.

The lawsuit also labels Montemayor’s treatment as ‘a horrific example of the unjustified police abuse and First Amendment retaliation meted out violently against peaceful protestors’.

One of his attorneys, Dan Stormer, said the LAPD must be held accountable.

Stormer said: ‘A civilized society cannot survive if the police are allowed to run wild in the streets. The LAPD is out of control.’