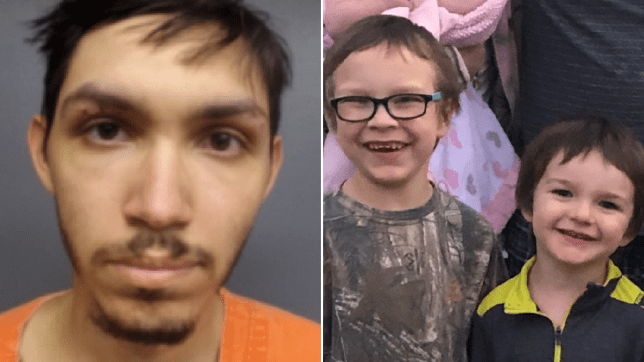 Zachary Salazar is accused of deliberately crashing his car into a family’s van, killing Riley Burgess and James Crowley, right, after lashing out at his girlfriend of two months, who is pregnant (Pictures: Bowie County Jail/ Bates Family Funeral Home)

A man was so furious at his girlfriend of two months’ pregnancy he deliberately smashed into a family’s car, killing two children and an unborn baby, police say.

Zachary Salazar, from DeKalb in Texas, allegedly texted partner Anola Jordan on January 13 telling her: ‘If this night gets any fucking worse than it already is I’m probably gonna end up killing someone, or killing myself. One of the fucking two.’

Salazar is said to have felt pressured into becoming Jordan’s boyfriend after she got pregnant shortly after they began seeing one another. He is then said to have confronted Jordan at her home after she blocked him from messaging her on Facebook, and shouted ‘Fuck it, I’ll wreck,’ after being told to leave.

Salazar sped down the Highway 82 and drove onto the wrong side of the road, smashing his car head-on into a van and killing Riley Burgess, 7, and three year-old James Crowley, it is alleged.

An online obituary for the boys says ‘Baby Rainer’ was also killed, although police have not shared further details of that alleged victim.

The boys dad James Rainer, who was driving the van, told police after that he saw Salazar’s car coming towards them, and tried to take evasive action to avoid a collision.

But Rainer said that ‘Salzar continued tracking his vehicle until causing the collision,’ according to a police affidavit seen by KTAL. Rainer and his pregnant wife Ashly survived the crash, although their unborn baby did not.

James Rainer wrote on Facebook afterwards: ‘Please pray for my family and the individual who struck our vehicle.

‘God’s forgiveness will overcome everything. My boys I know are smiling in Jesus’ lap as I type. I love y’all and please pray.’

Salazar has been charged with two counts of capital murder, meaning he could be executed if he is convicted.

He is being held at Bowie County Jail ahead of his next court appearance.