Dramatic footage shows how a high-police police chase ended in a rescue after a suspect had to be pulled from a burning car.

The video, released by police in Vineyard, Utah, shows the suspect trapped in the wreckage after the vehicle plummeted around 20ft off a bridge yesterday.

An officer is seen pulling up and running to the accident scene where an SUV can be seen in flames at the bottom of an overpass.

Two other police join and ask the driver, now identified as Dustin Scott Butterfield, to get out of the vehicle.

The officers pull him out of the wreckage and to safety.

A Facebook post from the Orem Police Department in the US said police were called at 8.45am to reports of a hit and run.

It commended the officers – named as Halladay, Harrison and Bybee – for their bravery during the rescue. 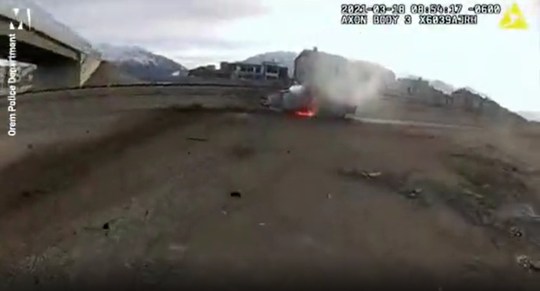 An SUV is seen in flames at the bottom of an overpass in Vineyard, Utah (Picture: Reuters) 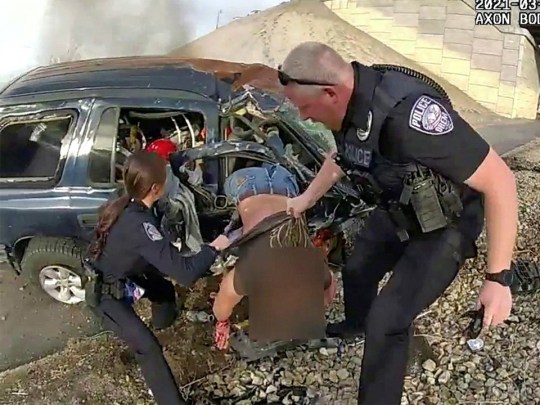 Police officers pull the driver from the burning wreckage of the car (Picture: Reuters)

‘Not thinking about the danger of a burning vehicle, they were able to pull the driver, who was hanging out of the passenger side window, free from the burning vehicle and to safety,’ the post added.

‘The officers put their own lives at risk to save the driver, who had sustained a broken leg and other injuries during the crash.

‘The driver was treated by paramedics and transported to a local hospital to receive treatment.’

According to local media reports, Butterfield was charged with felony evading, driving under the influence of alcohol, failure to stop for a school bus, and running a red light.

Due to his serious, but not life-threatening injuries, he was not taken into custody but will receive a summons to appear in court at a later date, the website said.