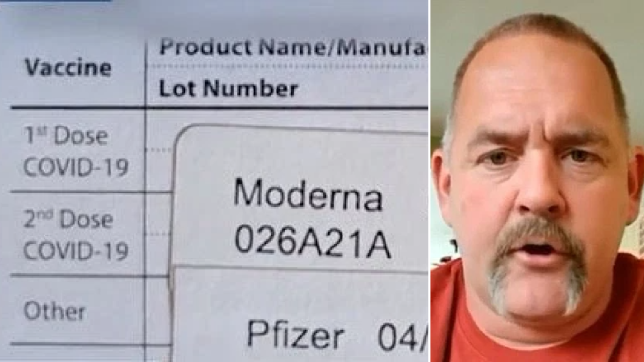 A man who was mistakenly given coronavirus shots from two different manufacturers left feeling ‘uneasy’ that ‘they screwed up’. Craig Richards said the mix-up happened on Tuesday morning when he was given a Pfizer shot as his second dose – before the person administering it realized his first dose was from Moderna.

‘He said, “You ready for a poke?” I said, “Sure”, and he poked me’, Richards said, according to WMUR. ‘As soon as he poked me, he looked down at my card, and I think he realized he just gave me the Pfizer’.

Richards had received his first dose of the Moderna jab in March at the same vaccination site in Lempster, a town in New Hampshire.

‘I looked at him and said, “You did not just give me the wrong shot”. And he bolted!’ Richards said. ‘I don’t know if I had a real angry face on’.

Craig Richards got the Moderna jab in March and the Pfizer jab by mistake at the same vaccination center (Picture: WMUR)

Both the Pfizer and Moderna vaccines entail two doses. Taking only one dose is said to provide some level of protection, but recipients should take both doses to reap the full benefits.

A supervisor at the vaccination site spoke with Richards and according to him, said, ‘You’re going to be fine. The good news is, you are fully vaccinated’

But Richards was not pleased and could not believe what was happening. He brought up the decision by the US Food and Drug Administration (FDA) and the Centers for Disease Control and Prevention (CDC) this week to pause using the single-dose Johnson & Johnson vaccine due to six blood clot cases.

‘With everything going on with Johnson and Johnson being pulled, you go home and you’re uneasy about the whole thing’, Richards said. ‘They screwed up. Something is wrong over there’.

In a statement, the state Department of Health and Human Services said that Richards will be just fine.

‘A mixed series is safe, as (CDC) guidance recommends mixing the series if the brand from the first dose is not available at the second dose’, the statement read. ‘While there have not been any clinical studies on whether a mixed series is as effective as a complete series, it will still provide enough protection that a third dose is not necessary or recommended’.

The UK has launched a study into the effectiveness of mixing different types of coronavirus vaccines, including Pfizer and Moderna.