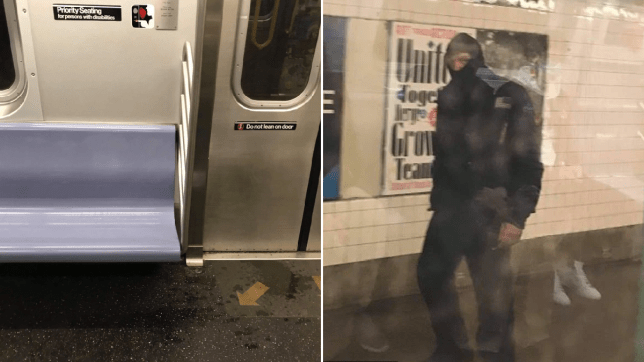 A man urinated on a 25-year-old Asian woman in a New York City subway on Saturday. (Pictures: AsianFeed)

A man exposed himself to a young Asian woman riding the subway in New York City and urinated on her. Kathy Chen, 25, said she was riding the F train toward Queens on Saturday when a white man entered from the train car behind her and stopped near her.

‘He started standing really close to me and I began to feel uncomfortable,’ Chen told the blog AsianFeed. ‘So I scooted to my right and noticed that his penis was pointed at me and that there was urine on my bag and jacket.’

Chen said she made eye contact with the culprit but that he did not say anything. 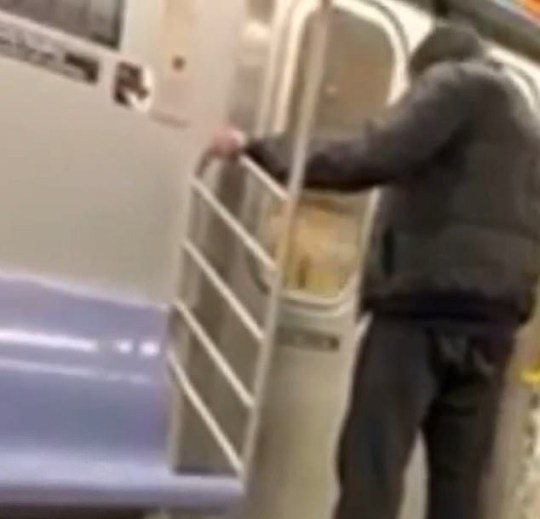 Kathy Chen took photos of the man she said urinated on her as he got off the train. (Picture: AsianFeed)

Despite the disturbing incident, ‘none of the bystanders said or did anything,’ she said.

As the man got off the train at the 75th Avenue stop, Chen took a photo.

Chen said she thought about getting off the train and quickly reporting the crime to police but kept riding the train until the final stop because ‘I was alone and afraid.’

A witness in front of her recorded a video of the incident and shared it with her but from the angle it was shot, it was difficult to see what the man was doing.

‘He like projected his penis at me,’ Chen said.

Chen described the man as in his 60s, about 6 feet tall and wearing all black and a ski mask and a jacket with an American flag patch on the left chest area.

She filed a sexual harassment report but the suspect remains at large.

Anyone with information on the incident is urged to call New York Police Department Crime Stoppers at 800-577-TIPS.

Chen was targeted amid a surge in hate crimes against Asians across the country.

On Sunday, Marc Mathieu, 36, was charged with assault as a hate crime for allegedly punching Narayange Bodhi of Sri Lanka while shouting anti-Asian slurs on the 1 train in Manhattan on Friday.