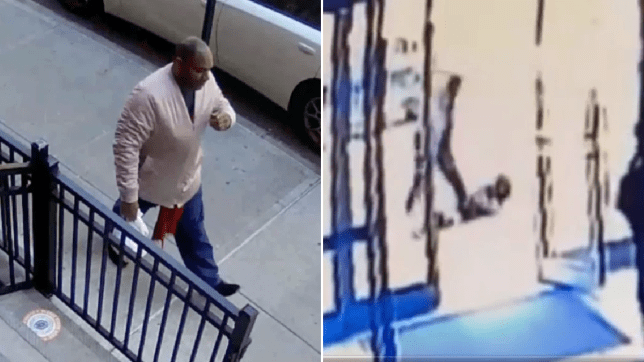 Surveillance video showed a man kick down and stomp on an elderly Asian woman on a sidewalk in Midtown Manhattan (Pictures: New York Police Department)

A 38-year-old man has been arrested for allegedly kicking an Asian woman in the head over and over again in a brutal racist attack.

Brandon Elliot was detained by the New York Police Department in the early hours of this morning after a man was caught on camera randomly beating a 65-year-old woman in the street.

It comes after detectives released disturbing surveillance footage, captured on Monday, of the moment a man kicks a woman to the ground in broad daylight and viciously attacks her.

The attack happened outside a luxury apartment building in Midtown Manhattan and the video shows the attacker – who police believe is Elliott – kicking the woman in the face as she lays on the ground.

The suspect, who cops say lives in a nearby hotel that serves as a homeless shelter, is also accused of hurling anti-Asian abuse at her.

Footage of the attack was posted on Twitter by the NYPD and caused national outrage, including of several witnesses who were seen on the video standing by without intervening.

According to the New York Post, some staff members at the apartment block were suspended by building management after the attack.

‘The staff who witnessed the attack have been suspended pending an investigation in conjunction with their union’, a statement by building management said.

‘The Brodsky Organization is also working to identify a third-party delivery vendor present during the incident so that appropriate action can be taken.’ 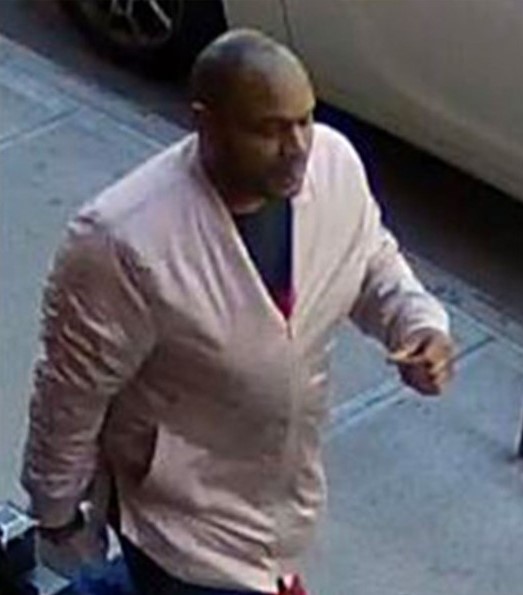 The NYPD released surveillance footage of the suspect police believe to be responsible for the attack (Picture: NYPD)

On Tuesday, the victim’s daughter’s boyfriend told the New York Post that the woman’s attacker ‘locked eyes’ with her – then beat her so that ‘She wasn’t there’ after the first blow.

The man, named only as Luca, said: ‘She said he was walking towards her and he locked eyes with her.

‘She tried to avoid him, like how people do when you walk in New York City, but he came right for her.

‘After the first hit, she wasn’t even there. I can’t see how she got up from that.’

The victim was rushed to the NYU Langone Hospital following the attack and is in a stable condition.

Elliot is being held at a Midtown police precinct pending his arraignment in court.