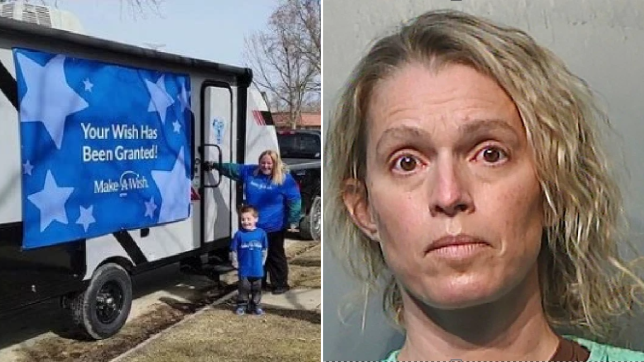 The former CEO of a Make-A-Wish chapter has pleaded guilty to embezzling tens of thousands of dollars from the charity that helps children with terminal and critical illnesses.

Jennifer Woodley, 40, admitted in a written guilty plea that she made unauthorized charges on a foundation credit card and gave herself salary increases and a bonus. In her plea filed last week, Woodley confessed she entered false information into the foundation’s records to explain those expenses.

Woodley’s embezzlement amounted to nearly $41,000, according to a charging document.

She became the CEO and president of the Make-A-Wish America chapter based in the Des Moines suburb of Urbandale, Iowa, in 2019. The foundation noticed irregularities in the finances and launched an internal review last summer. The organization fired Woodley in July and called for a criminal probe.

‘We are working on assessing the full extent of these irregularities and determining next steps,’ Make-A-Wish Iowa board of directors chair Joshua Norton told The Des Moines Register at the time.

In January, Woodley turned herself in. She pleaded guilty to two counts of first-degree theft and one count of fraudulent practices, both of which are felonies. Judge Scott Beattie accepted Woodley’s guilty pleas on Tuesday and set her sentencing hearing for July 20.

‘We are pleased the Iowa legal system resolved this matter with an agreement that includes restitution,’ Make-A-Wish said of Woodley’s plea in a statement to Law & Crime. ‘As always, we remain committed to ensuring that donations to Make-A-Wish are safeguarded and properly used to advance our vision of granting the wish of every eligible child fighting a critical illness.’

Woodley’s lawyer Nicholas Sarcone said he would request a deferred judgment during the sentencing hearing. If the judge grants the request, Woodley could have the case expunged from her record granted she finishes her probation and other stipulations in her sentence.

Woodley, who is out on bond, has her address now listed in Winston Salem, North Carolina, according to jail records.

Man, 21, accused of knifing flower seller to death is son of ‘victim’s ex-lover’ who was found dead 2 months ago