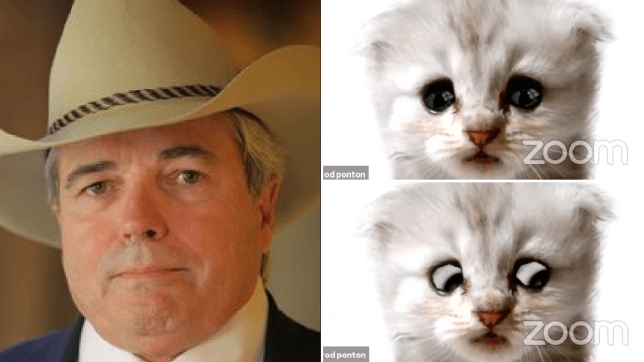 Texan lawyer Rod Ponton, main photo, was left flustered during a virtual court hearing on Tuesday when he was unable to turn off a kitten face filter (Pictures: News9/394th Judicial District Court)

A flustered lawyer tried desperately to turn off a kitten face filter during a virtual court hearing. Rod Ponton, from Marfa in Texas, could be heard panicking as Judge Roy Ferguson drew the cute filter to his attention during a contraband case held over Zoom on Tuesday.

The augmented reality feature saw the kitten’s eyes and mouth move as Ponton spoke, with two other lawyers looking bemused on their own webcams as the bizarre incident unfolded.

Ponton said: ‘I think it’s a filter, I don’t know how to remove it. I’ve got my assistant here – she’s trying to.’

Clearly panicked by the unlikely drama – and his inability to remove the filter, Ponton continued, I’m prepared to go forward with it. I’m here live – I’m not a cat.’

Judge Fergson assured Ponton that he hadn’t mistaken him for an actual kitten, and began giving him instructions on how to remove the filter as the clip concluded.

Ponton later told Vice that the filter was a mishap caused by his secretary, and that he had been able to remove it shortly afterwards, before continuing with the hearing.

And Judge Ferguson clearly saw the funny side of the incident, tweeting a link to it afterwards.

He wrote: ‘IMPORTANT ZOOM TIP: If a child used your computer, before you join a virtual hearing check the Zoom Video Options to be sure filters are off. This kitten just made a formal announcement on a case in the 394th (sound on).’

Ferguson also praised Ponton for his handling of the blunder, adding: ‘These fun moments are a by-product of the legal profession’s dedication to ensuring that the justice system continues to function in these tough times.

‘Everyone involved handled it with dignity, and the filtered lawyer showed incredible grace. True professionalism all around!’

Covid has triggered a series of comical filter-related blunders, with newsreaders and politicians unwittingly appearing on camera to deliver serious news without realizing that comical filters have been used to alter their faces.