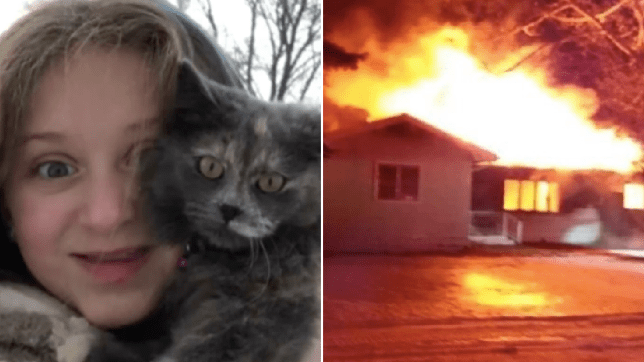 Kassidee’s pet kitten Sage woke her up to let her know their house was on fire – but sadly perished in the ensuing blaze (Pictures: WDAY)

A heroic kitten saved her family from a huge house fire that broke out at their home – but ended up perishing in the flames. The 10 month-old Kitty, called Sage, began pawing 10 year-old Kassidee Gallaway’s face on the night of January 20 after the blaze broke out at the family’s home in Crystal, North Dakota.

Kassidee said: ‘It smelled like burnt pizza. It was really hot in my room. I couldn’t breathe and I went out to get my breath.’ Realizing the house was on fire, Kassidee quickly ran to wake up her parents and brother.

They managed to make it out safely, but sadly Sage got lost in the commotion, and ended up dying in the fire, which totally destroyed the family’s home.

Kassidee’s dad Cody Saiger hailed his daughter and late pet’s heroism, saying: ‘I dont think any of us would be here,’ if they hadn’t been woken up in time.

He also recalled how Kassidee waited until her loved-ones were at the front door before opening it, having previously read that opening a door and letting in oxygen can fuel a blaze.

After the family escaped through the open door, the inferno intensified and blew the windows out of their home, while also causing its roof to collapse, InForum reported.

Firefighters from the Hoople Fire Department gave the family a special helmet, to honor Sage, who they had adopted just a month before her death.

A card accompanying the helmet read: ‘She was truly one of us by getting you and your family out in time. Never forget your furry friend and our hero Sage.’

An investigation into what caused the fire continues, with Kassidee and her family now slowly trying to rebuild their lives.

Arsenal and Man Utd teams from last time Gunners did double over Reds including Cristiano Ronaldo, Henry, RVP and Rooney