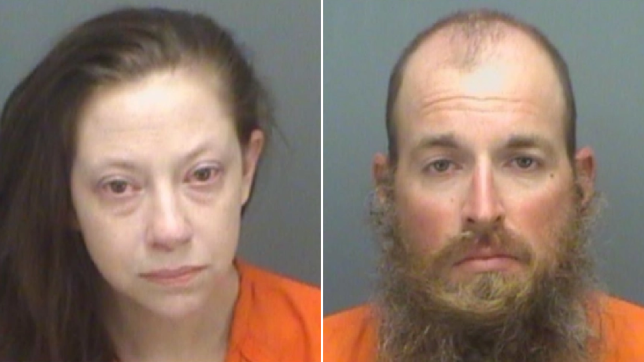 Ashley Ferguson, left, allegedly starved a child in her care to death. She and her husband Matthew, right, are also accused of neglecting two other children until their legs withered away (Pictures: Pinellas County Jail)

A husband and wife starved three children in their care until one died, and the other two suffered leg withering that left them unable to stand up. Ashley Ferguson, 33, and her husband Matthew, 34, are said to have killed one of the children at their home in Clearwater, Florida, last July.

The pair, who were arrested and charged on Thursday, are also accused of starving the other two children until they were too weak to speak.

Their alleged abuse was uncovered after paramedics were called to reports of an unresponsive child in July 2020, and arrived at the Fergusons’ home to find one of the three youngsters dead.

Pinellas County Sheriff’s Deputies who also arrived on the scene said the youngsters: ‘had bedsores, diaper rash, severely matted hair, were unable to walk or bear any weight on their legs, and were also unable to speak.’ They are said to have been given only milk to survive.

The victims’ ages, genders and relationships to the Fergusons and one another have not been shared by investigators. Detectives say the children were left unattended for long periods of time, and were deprived of necessary medical care.

One of the children lost the ability to walk in April 2020, but wasn’t taken to a doctor. Ashley Ferguson is said to have lied to her spouse about taking that child to an appointment, the Tampa Bay Times reported.

That youngster is believed to be the one who ultimately succumbed to the abuse and neglect.

The other two children were rescued by sheriff’s deputies, and required urgent medical care, including oral surgery, as well as special ‘feeding therapy’ to help nourish them after extended starvation.

Both children were placed in the care of a relative, and now require speech as well as physical therapy.

They are being held at Pinellas County Jail ahead of their next court appearance.