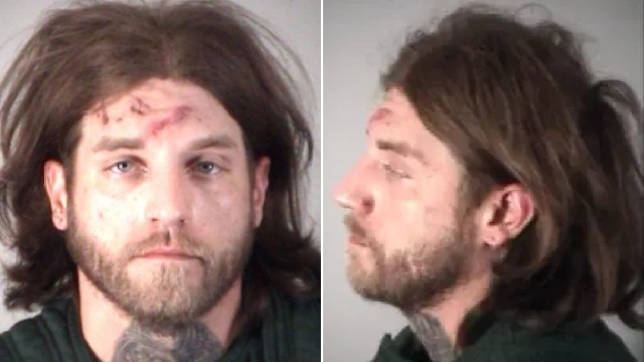 A killer murdered his 77 year-old grandfather – then hacked his victim’s ears off and pulled them out of his pocket to show sheriffs deputies, it is claimed. Kolby Parker allegedly confessed to killing Ronald Wells in DeLand, Florida, on Saturday.

Lake County Sheriff’s Deputies were searching him for weapons when they felt something ‘soft but firm’ in his pockets. The cops, who had yet to find Wells body, asked Parker if he knew where the missing man was, only for Parker to produce the ears and say ‘There he is,’ according to an arrest affidavit.

Parker claimed he and Wells were smoking weed together when they began arguing, it is alleged. He told detectives that Wells began attacking him with a butcher’s knife, prompting him to seize the blade and stab his grandfather in self-defense. Parker is also said to have beaten Wells with a baseball bat.

The victim was found dead on his porch with multiple stab wounds and both ears missing. It is unclear if they were removed while Wells was still alive, or after he had been killed. Parker also had a decoration in his bedroom which said ‘The Family Butcher.’

Parker is said to have claimed that he wanted his grandfather to be with his late grandmother. He was charged with second-degree murder, as well as battery on a law enforcement officer and resisting violence after allegedly behaving violently towards cops who came to arrest him.

Parker is being held without bond ahead of his next court appearance, CBS12 reported.