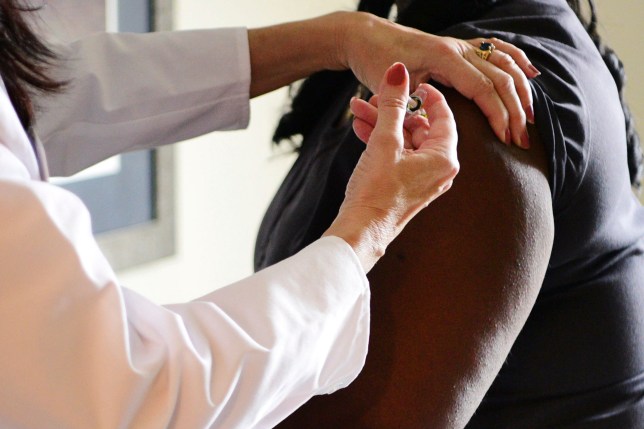 The UK has ordered 30 million doses of the single dose jab (Picture: AP)

The efficacy rate from phase three global trials is lower than the BioNTech/Pfizer, Moderna and Oxford/AstraZeneca vaccines that have already been authorised.

But whereas those vaccines require two shots several weeks apart, the Johnson & Johnson (J&J) jab only requires one injection for the recipient to receive full protection.

The US pharmaceutical group says it will soon seek emergency authorisation for its jab, which the UK has pre-ordered 30 million doses of.

As a single shot vaccine, the Janssen vaccine as it is sometimes also called, could solve supply issues.

J&J has said it hopes to manufacture one billion doses of the vaccine by the end of 2021.

Almost 7.5 million people have been vaccinated against coronavirus in the UK.

If the UK approves the shot it would have enough authorised jabs to inoculate 108.5 million people – that’s 40 million more doses than the population.

The news comes after Novavax announced their vaccine is 89% effective, including against the new UK and South Africa strain of Covid. Both will need to be reviewed by regulators before they can be used.

Boris Johnson tweeted on Thursday evening: ‘Good news that the Novavax vaccine has proved effective in UK trials. Thank you to all the volunteers who made these results possible. Our medicines regulator will now assess the vaccine, which will be made in Teesside. If approved, we have 60m doses on order.’