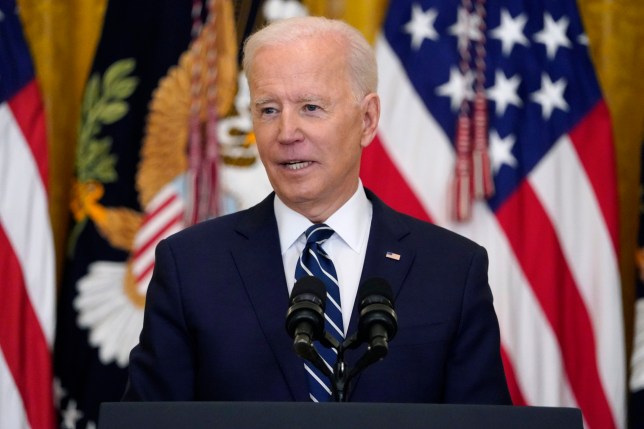 President Joe Biden speaks during a news conference in the East Room of the White House, Thursday, March 25, 2021, in Washington (Picture: AP)

President Joe Biden insisted that the migrant crisis at the southern border with Mexico is not as bad as it was under his predecessor Donald Trump.

Biden said that a surge in migrants attempting to cross the border happens every year in January, February and March, when people are less likely to die than in the summer under the desert heat. Biden has been perceived by many as a ‘nice guy’ and softer on immigration than Trump.

Asked by a reporter to comment on immigration and the border crisis, Biden first joked that he is pleased about being seen as a ‘nice guy.’

‘Well look, I guess I should be flattered if people are coming because I’m a nice guy – that’s the reason why it’s happening – that I’m a decent man, or however it’s phrased, that that’s why they are coming, because they know Biden’s a good guy,’ the president said.

Biden added: ‘Does anybody suggest there was a 31 percent increase under Trump because he was a nice guy and he’s doing good things at the border and that’s the reason they’re coming?’

During his first formal press conference since taking office, Biden claimed that ‘the truth of the matter is, nothing has changed’ in the realm of migration into the country.

‘This happens every single, solitary year,’ he said. 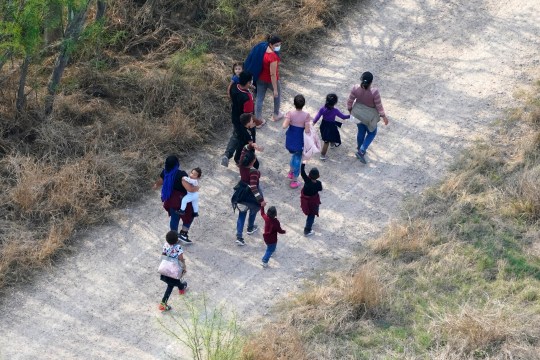 Migrants including children walk on a dirt road after crossing the US-Mexico border, in Mission, Texas (Picture: AP)

Biden appeared to defend himself against claims that his rollback of Trump’s immigration policies is drawing more migrants to the US. The morning after a virtual meeting with Biden on March 1, Mexican President Andres Manuel Lopez Obrador called Biden the ‘migrant president.’

‘They see him as the migrant president, and so many feel they’re going to reach the United States,’ Obrador said at the time.

On Thursday, Biden was also asked if he regretted doing away with Trump’s immigration policies.

‘All the policies that were underway were not helping at all, were not slowing up immigration,’ Biden said, and referenced Trump’s controversial ‘zero-tolerance policy’ that led to family separations at the border.

Biden added that the past policies damaged ‘international law’ as well as ‘human dignity.’

Trump’s hard-line immigration policies created tough rules for asylum seekers and families were separated at the border with children getting held in cages built by the Obama administration. Trump blamed Democrats for his failure to deliver his biggest campaign promise, constructing a border wall.