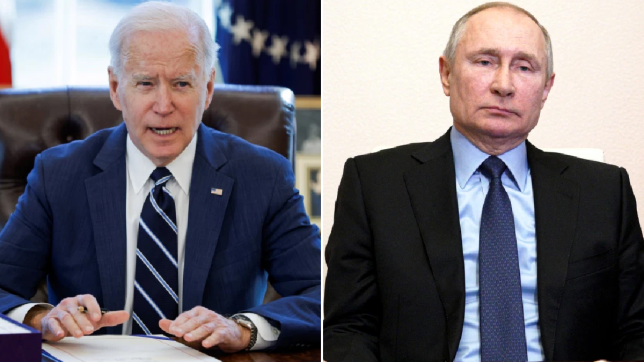 Joe Biden has branded Vladimir Putin a killer with no soul in a new interview (Pictures: AP)

Joe Biden branded his Russian counterpart Vladimir Putin a killer with no soul. Asked by journalist George Stephanopoulos whether he thought Putin was a killer, President Biden answered: ‘Uh-huh, I do.’ Biden made the remark shortly after Stephanopoulos grilled him about an earlier occasion where he said Putin ‘Doesn’t have a soul.’

Biden answered: ‘I did say that to him, yet. And his response was “We understand one another.” I wasn’t being a wise guy. I was alone with him in his office. That’s how it came about.

‘It was when President Bush said he looked in his (Putin’s) eyes and saw his soul. I said, “I looked in your eyes and I don’t think you have a soul.” He looked back and said, “We understand each other.”‘ Speaking on Good Morning America, Biden was referring to meetings he held with Putin while vice president.

Many of Putin’s critics or enemies have died in violent or suspicious circumstances, although the Russian leader denies any involvement in those deaths.

During the same interview, Biden also warned Russia would ‘pay a price’ for interfering in US presidential elections, but refused to elaborate further on what those consequences would be.

The president spoke out even after Director of National Intelligence Avril Haines said Russia did not meddle in the 2020 contest that Biden ultimately won.

Russia did interfere in the 2016 election, the US Senate ruled last year, after an investigation found the Kremlin had tried to harm Hillary Clinton’s election campaign.

Donald Trump ultimately won that election, and was later cleared of allegations that he had directly colluded with Russia during his campaign.

Biden’s Good Morning America interview is only his second since taking office.

The 78 year-old president has faced mounting criticism over his lack of contact with journalists, and is due to hold a press conference next Thursday.

How Long After Getting a COVID-19 Vaccine Is It Effective?

Daniel Kaluuya and Carey Mulligan are set to host ‘SNL’