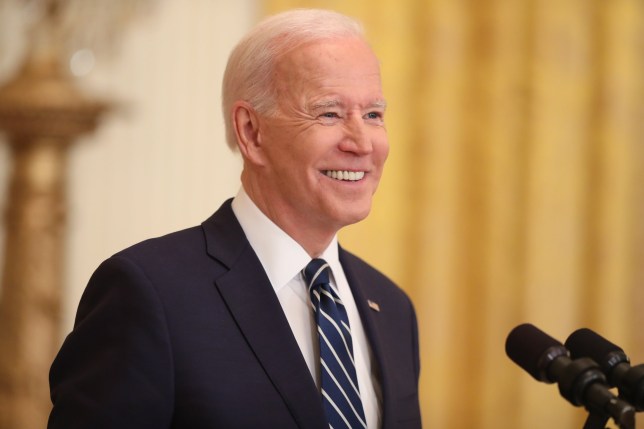 Joe Biden has said he’ll run for president again in 2024 – and joked that he ‘misses’ Donald Trump (Picture: EPA)

Joe Biden has confirmed he will run again for president in 2024 – and joked that he ‘misses’ Donald Trump. Speaking at his first presidential press conference on Thursday, the President of the United States, 78, was asked why he hadn’t announced a re-election run, when Trump had at the same stage of his first term.

He answered: ‘My predecessor needed to. God I miss him. The answer is yes, my plan is to run for re-election.’ Moments later, Biden struck a more tempered tone when asked by CNN reporter Kaitlan Collins to definitively confirm that he would run for office again in 2024.

Biden answered: ‘That is my expectation. I’ve never been able to plan three and a half four and a half years in the future. I’m a great respecter of fate.’ Biden went on to say that he ‘expected’ he would launch a second presidential campaign alongside current Vice President Kamala Harris, saying: ‘She’s doing a great job.’

And asked if he believed he’d be up against Trump again, Biden said: ‘Oh come on, that’s not going to happen. I don’t even think about, I have no idea. I have no idea whether there’ll be a Republican Party.’

Biden is already the oldest president ever to take office. Donald Trump was the second oldest to take office, and was 69 when he was inaugurated in January 2017.

Last summer, The New York Times reported that he had privately conceded he would serve as a single-term president, and that Biden wished to try and heal divisions in the US that dramatically deepened during Trump’s controversial time in office.

Trump has teased a possible run in 2024, and remains hugely popular with Republican voters.

But other political pundits think Trump is merely hoping to use his support to fundraise for other ventures, and instead wield his power to pick the next Republican presidential candidate.