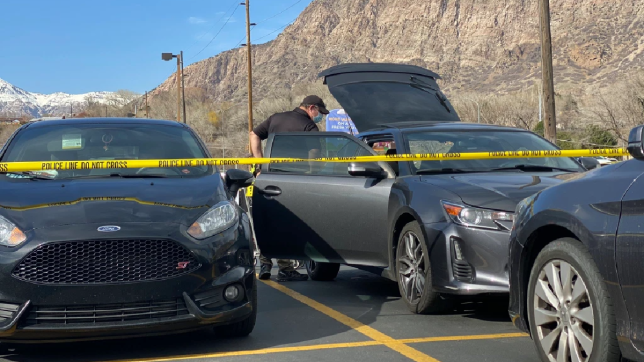 The shooting happened in a parking lot outside a grocery store in Ogden, Utah (Picture: KSL-TV)

A jealous ex shot and killed his former girlfriend after telling his replacement ‘You took her from me, now I’m taking her from you’.

The unidentified man, who police say shot himself when they tried to arrest him, allegedly gunned down his 41-year-old former lover in a parking lot outside a grocery store in Ogden, Utah, on Saturday lunch time.

A witness at the scene, claiming to be the victim’s current boyfriend, told KSL-TV that he received a text message from the suspect that said, ‘You took her from me, now I’m taking her from you’, before the shooting happened.

The identities of the suspect and his victim have not yet been released by Ogden Police Department.

Deputy fire chief, Shelby Willis, with the Ogden City Fire Department, said the woman sustained one gunshot wound to the head and died at the scene.

Following the shooting, the suspect left the scene in a black Toyota SUV but only made it less than four miles down the road before police caught up with him.

In a statement, Ogden Police said ‘he was quickly identified and located in the front yard of a home in the 900 block of Maple Street in Ogden’, but he ended up in a stand-off with officers for several hours.

Neighbor and witness, Jackie Martin, said the suspect was trying to escape.

She said: ‘I think he was trying to get away.

Neighboring homes were evacuated as the SWAT team was drafted in to negotiate with the suspect who was armed with a semi-automatic handgun.

Don Johnson, also a witness, said: ‘Looks like they’ve been negotiating with him, throwing him some waters.

‘He’s smoking cigarettes and is pretty much holding a gun to his head the whole time.’

According to police, the suspect shot himself after several hours of negotiating.

He was taken to hospital and remains in critical condition, officials have said.

The First Interstellar Comet Ever Detected Was Lonely