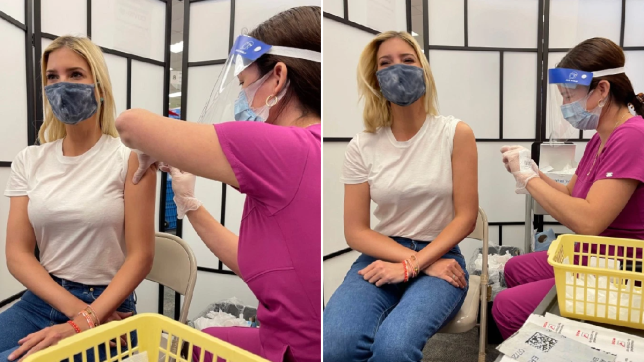 Former first daughter Ivanka Trump rejoiced over getting her first coronavirus vaccine and shared photos of the moment, after reportedly holding off on her first opportunity.

‘Today, I got the shot!!!’ ex-President Donald Trump’s eldest daughter tweeted on Wednesday afternoon. ‘I hope that you do too!’

In two photos accompanying the tweet, the former senior adviser to the president wore a white T-shirt, jeans and a mask and appeared to smile as she received the injection. Ivanka, 39, thanked Nurse Torres, who was shown in the pictures administering the jab.

‘Getting vaccinated is our best way to beat this virus and protect ourselves and others’, Ivanka said in a statement to the Associated Press. She received the Pfizer vaccine in Florida, where people 16 years and older can sign up for the jab.

As a senior White House adviser, Ivanka was eligible to get the vaccine along with other staff, but she chose to wait, two people with knowledge on the matter told AP.

Ivanka got the Pfizer vaccine two days after the US Food and Drug Administration (FDA) and the Centers for Disease Control and Prevention (CDC) paused use of the single-dose Johnson & Johnson vaccine at federal sites because six people who got it developed blood clots. The agencies recommended that states also stop offering the Johnson & Johnson injection and it is being reviewed by the CDC.

Later on Tuesday, Ivanka’s father stated that ‘the Biden administration did a terrible disservice to people throughout the world’ by allowing the FDA and CDC to halt the Johnson & Johnson jabs.

‘The results of this vaccine have been extraordinary but now it’s [sic] reputation will be permanently challenged’, the former president stated. ‘The people who have already taken the vaccine will be up in arms, and perhaps all of this was done for politics or perhaps it’s the FDA’s love for Pfizer’.

Since the Johnson & Johnson jab pause, officials have expressed concern that Americans will be more hesitant to get vaccinated, even with the Pfizer and Moderna injections.

Ivanka and her husband Jared Kushner, who also served as a senior adviser in the White House, moved their family from Washington, DC, to the Miami area after her father left office in January. Ivanka’s vaccine tweet, which broke her silence on Twitter after nearly three months, was slammed by some critics but also garnered more than 38,000 likes by midday Thursday.