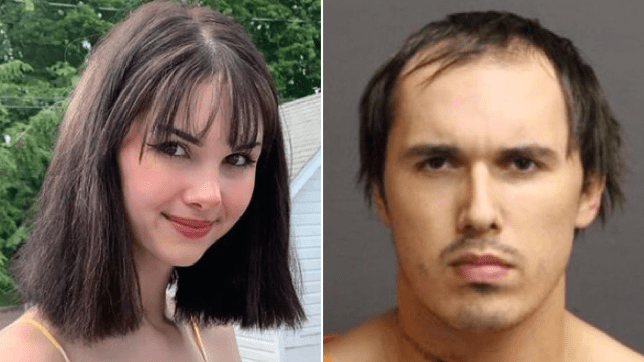 Internet ghouls repeatedly sent a murdered influencer’s 15 year-old sister photos of the victim’s mutilated corpse. Olivia Devins told a court Tuesday that she had to delete all her social media accounts after being inundated with the horrific photos of her sister Bianca, whose throat was cut by friend Brandon Clark in July 2019.

Speaking at the sentencing hearing of Clark at a court in Utica, New York, Olivia, said: ‘Many random people set their profile pictures as my sister’s death photo and went on my page knowing I would, without a doubt, see it.

‘The picture, to this day, continues to be sent to me, but I now have all of my social media accounts deleted.’ Olivia said she still suffers from nightmares as a result of the photos she gets sent, and struggles to trust new people.

The Devins family learned of Bianca’s death after being sent the graphic photos. Olivia, and her mother Kim Devins both gave victim impact statements, with Kim asking for Clark, 22, to spend the rest of his life behind bars, WKTV reported.

Kim said: ‘We seek closure in regards to the crime that took our beautiful angel from us by respectfully asking the court…to make sure that Brandon Clark remains in prison for the rest of his life, so that he cannot harm anyone else and inflict this horrific pain on any other family.’

Clark was ultimately sentenced to 25 years to life in prison, with Bianca’s family vowing to fight any attempt to free him on parole. Clark murdered Bianca after heading home from a Nicole Dollanganger concert in New York City.

He embarked on a violent rage after seeing Bianca kiss another man, despite her reminding him that they were not in a monogamous relationship.

Police say the murder was premeditated.

Clark almost decapitated Bianca with a large knife, then posted photos of her remains on a social media site.

He wrote a suicide note, and stabbed himself in the neck while posting photos online, but ultimately survived the attempt on his life, and was later arrested.

Social media giants including Facebook and Instagram attempts to wipe images of Bianca’s body from their servers in the wake of her murder.

Daniel Kaluuya and Carey Mulligan are set to host ‘SNL’