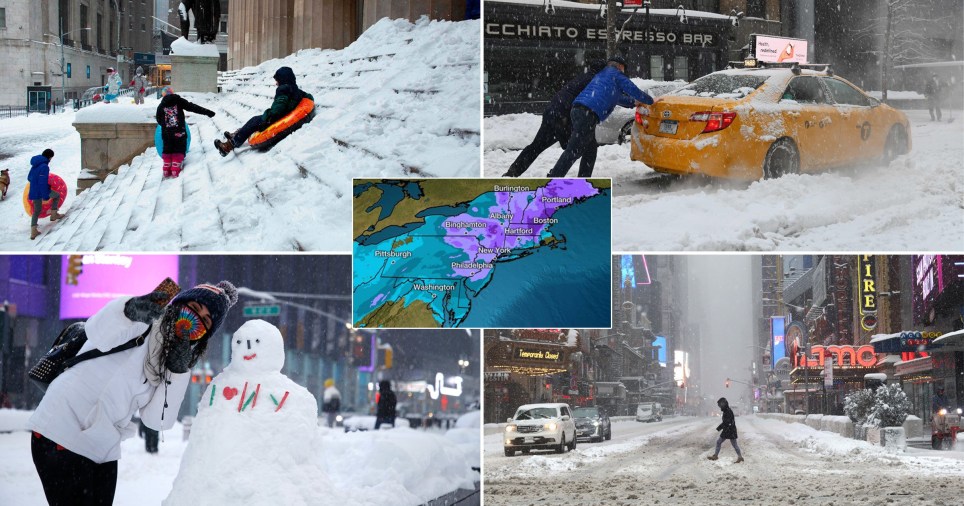 Forecasters expect 20 inches of snow to fall on New York City – which would be the 8th largest storm in its history (Picture: Getty)

New York City is braced for one of the heaviest snowfalls in its history as a huge storm that has already dumped for more than a foot of snow on the north eastern USA continued to wreak havoc on Tuesday.

Winter storm Orlena has cancelled well over 1,000 flights across the region and halted subway service in the city on Monday, when 17 inches (43 cm) of snow fell. Some 27 inches (68 cm) was dumped on areas of New Jersey and Pennsylvania.

New York declared a ‘state of emergency’ that restricted non-essential travel, moved all children back to remote learning and rescheduled long-awaited vaccine shots as the city braced for more snow.

Coronavirus vaccinations have also been cancelled, while tens of millions of people in the region fall under official weather warnings about the chaos.

Salt trucks and snow plows moved out across New York’s streets as Mayor Bill de Blasio announced that the few children who had returned to pandemic-era classrooms would also stay at home on Tuesday.

‘There will be locusts, next, at the rate we’re going,’ the Mayor joked as he also suspended outdoor dining.

An elderly Pennsylvania women has been left dead in the storm’s wake and it is now expected to pound inland areas with potential blizzard conditions on Tuesday. 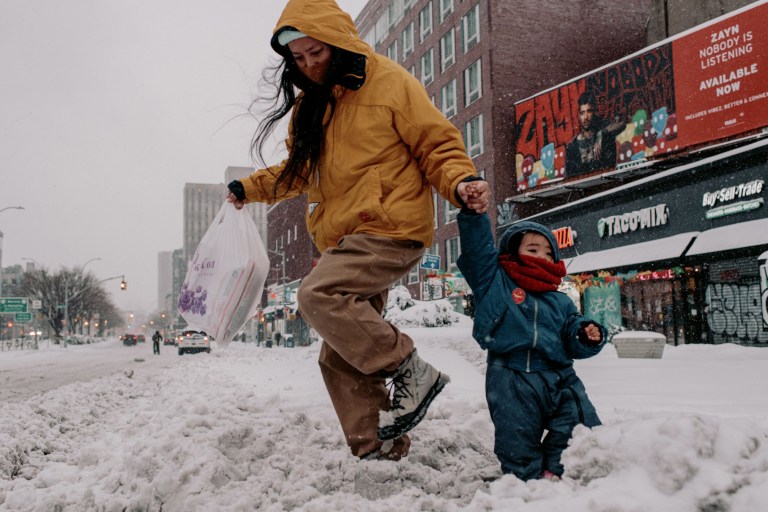 Schools is cancelled for the few children who were back in classrooms (Picture: Getty Images) 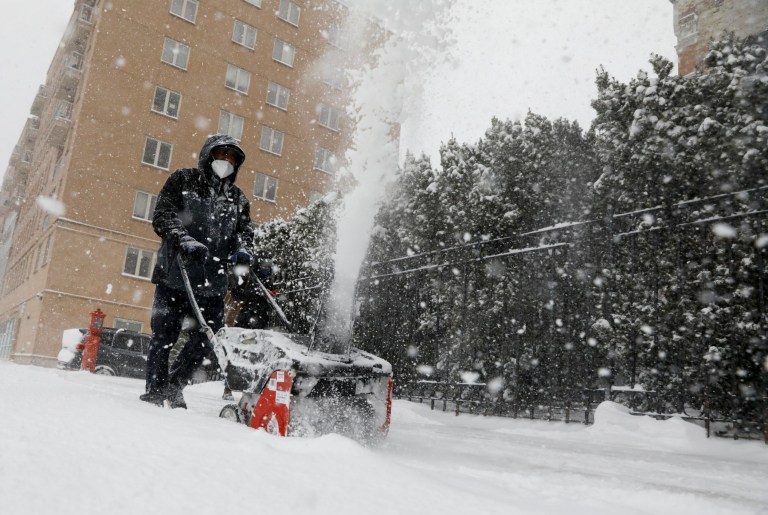 A person blows snow from a pavement in Brooklyn, New York City on Monday (Picture: Reuters) 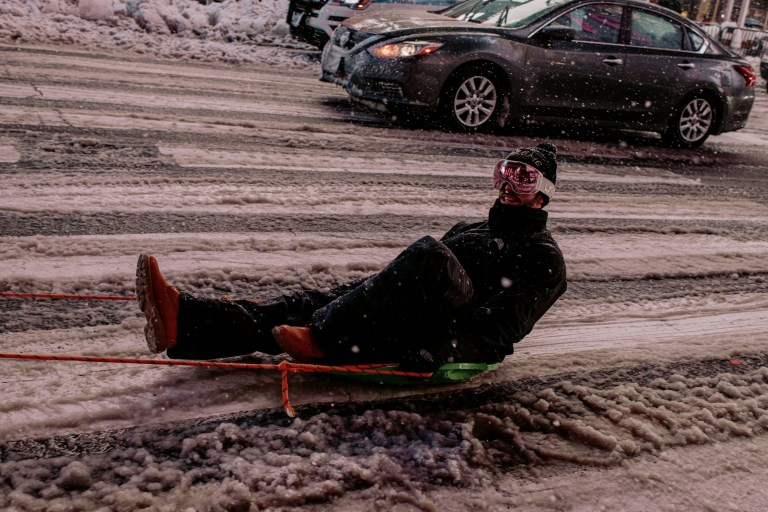 A man rides a sled towed by a truck near Times Square (Picture: Getty)

The National Weather Service (NWS) issued storm warnings from Virginia to Maine – home to tens of millions of people – as heavy snow mixed with gusts of up to 50mph were set to batter the eastern seaboard.

More than 1,600 US flights were cancelled – mostly at airports in New York, Boston, Philadelphia and Washington – disrupting travel that has already been heavily curtailed by the Covid-19 crisis.

Airlines cancelled all flights in and out of LaGuardia Airport and JFK Airport, while the majority were scrapped at Newark Liberty Airport.

New York state Governor Andrew Cuomo declared a state of emergency in the city and 44 other counties, and warned of possible road closures.

‘This is a dangerous situation. A life-threatening situation,’ Mr Cuomo told a news conference on Monday. 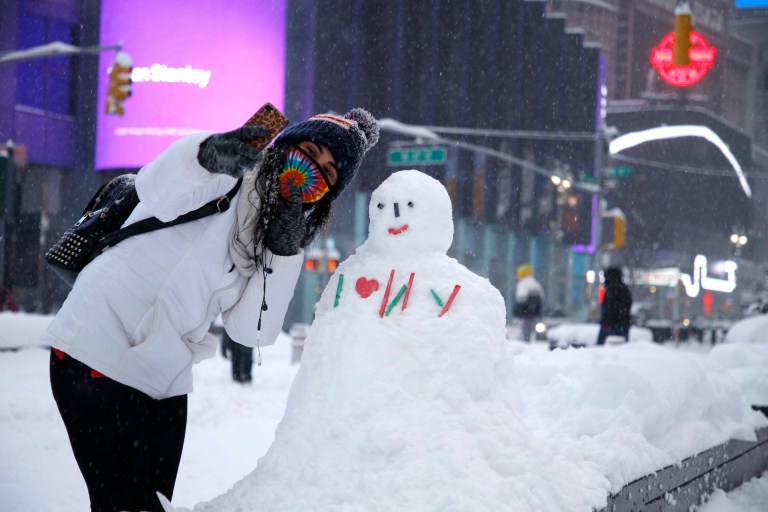 A woman takes a selfie with a snowman in Times Square (Picture: SOPA Images) 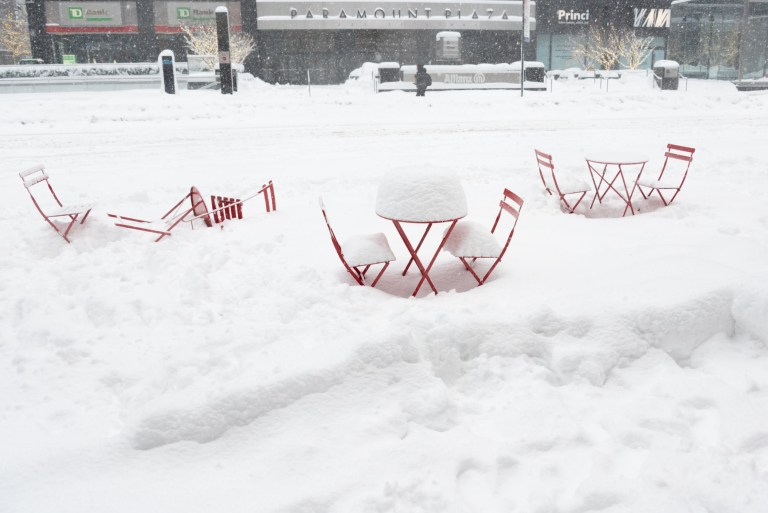 Outdoor dining is now banned in New York, though it seems unlikely to have been a popular choice (Picture: Getty Images) 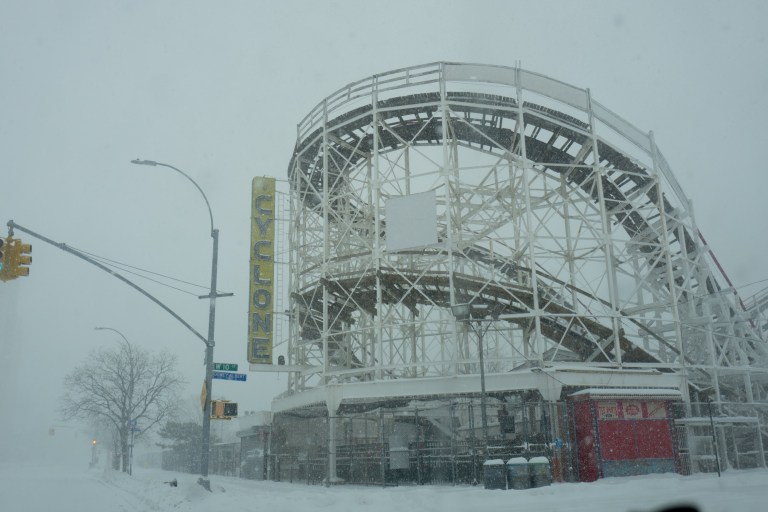 New York City’s record snowfall was 27 inches in 2016 – though this week’s storm is likely to come close (Picture: Curtis Means for DailyMail.com)

It comes after police in Allentown, Pennsylvania said that a 67-year-old woman suffering from Alzheimer’s disease was found lying dead in the snow on Monday after wandering away from her home.

Meanwhile, in a suburb of Wilkes-Barre, Pennsylvania, a couple in their fifties were shot dead by their neighbour during an argument about moving snow in front of their house, the local police chief said.

The shooter took his own life as police arrived to arrest him, he added.

The National Weather Service (NWS) said in its forecast for Tuesday: ‘The increasing winds could result in near blizzard conditions due to blowing and drifting of the snow. 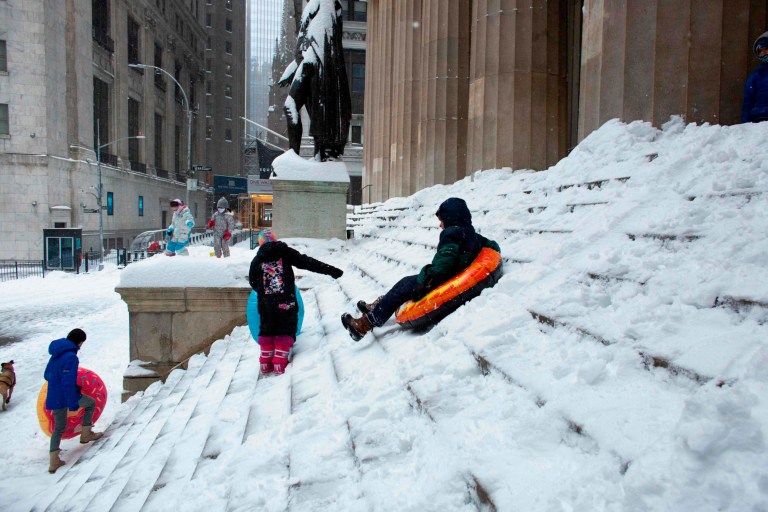 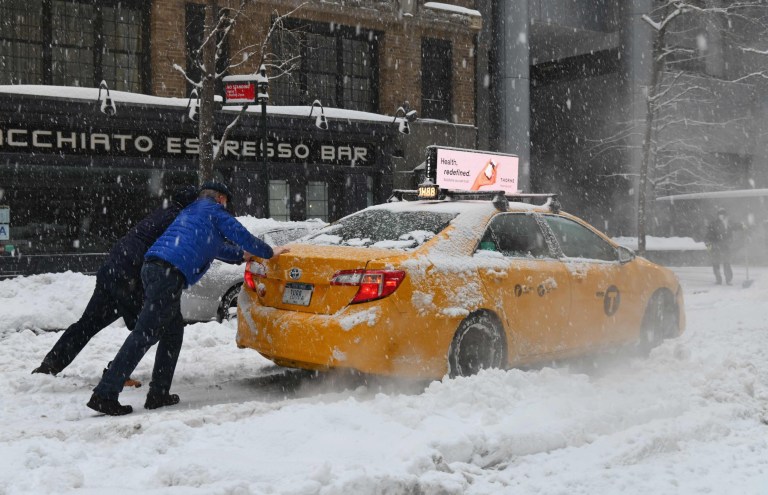 A taxi gets a helping hand in New York (Picture: AFP) 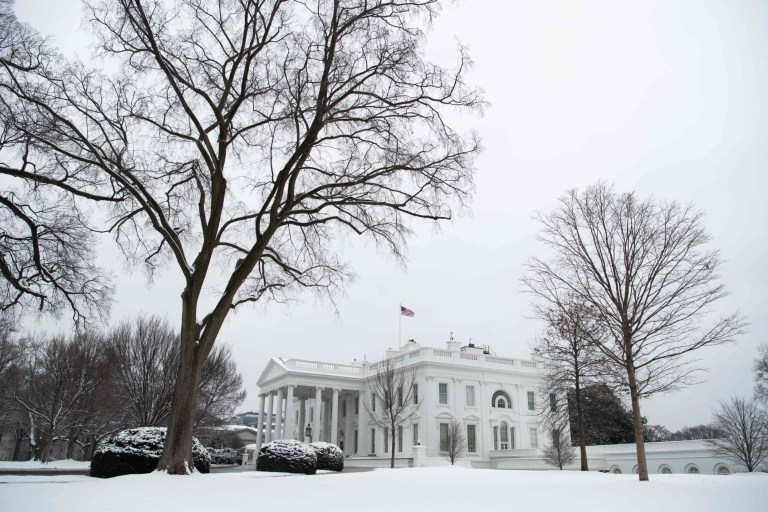 ‘This storm will be slow to depart as the main storm center becomes nearly stationary off the southern New England coast (and) expands its influence across the Northeast.’

Some areas of the New England coast, which saw a mix of snow and rain on Monday, were forecast by the NWS to see up to 15 inches (38 cm) of snow on Tuesday as the ‘nor’easter’ storm moved north.

Early predictions suggested the storm could bring up to two feet of snow to New York City in recent years – the most since a record-breaking blizzard dumped 27.5 inches (70 cm) on the city in 2016.

If that much falls, Orlena would become the city’s eighth-biggest snowstorm since records began in 1869.

Power outages triggered by wind and heavy, wet snow were also forecast for overnight across the region, but no major outages were reported on Monday night.

The storm hit mountainous parts of California with more than six feet of snow and heavy rain last week.

It then moved to the Midwest, dumping about eight inches of snow in Chicago, according to the NWS.

In Washington, where snow and ice formed since Sunday, President Joe Biden postponed a scheduled visit to the State Department due to the conditions.