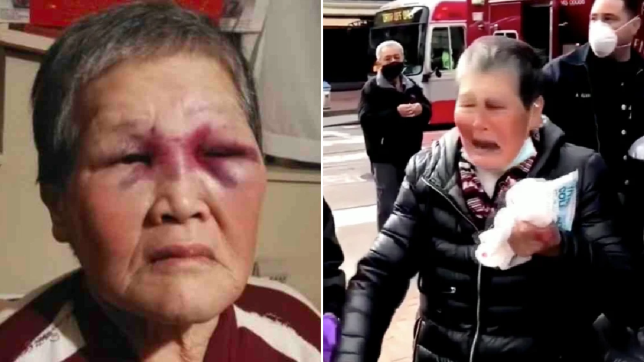 Xiao Zhen Xie was attacked in the street on March 17 (Picture: GoFundMe/KPIX 5)

A 76-year-old Asian woman who hospitalized her attacker by hitting him with a stick has said she will give almost $1m in donations to help fight racism. Xiao Zhen Xie was punched in the face unprovoked while waiting to cross the street in San Francisco, by the same alleged attacker who also beat Ngoc Pham, an 83-year-old Asian man who was shopping for groceries the same day.

Xie became an internet sensation after being filmed fighting off her apparent attacker, who has since been identified as 39-year-old Steven Jenkins. The suspect, who was filmed being wheeled into an ambulance on a stretcher after Xie fought back, has since been arrested and charged with assault and elder abuse.

In the wake of the attacks, which happened on March 17, a GoFundMe page set up for Xie has raised more than $900,000, a fortune she has pledged to give away entirely.

According to her grandson, John Chen, who set up the GoFundMe page, Xie has said ‘the issue is bigger than’ her, referring to the concerning rise in anti-Asian hate crimes in San Francisco, reports the San Francisco Chronicle. 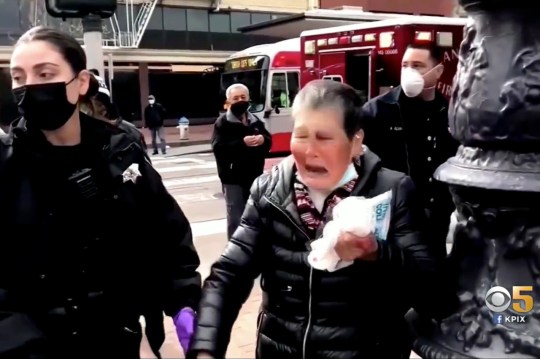 Xie fought off her alleged attacker with a stick, landing him in hospital (Picture: KPIX 5) 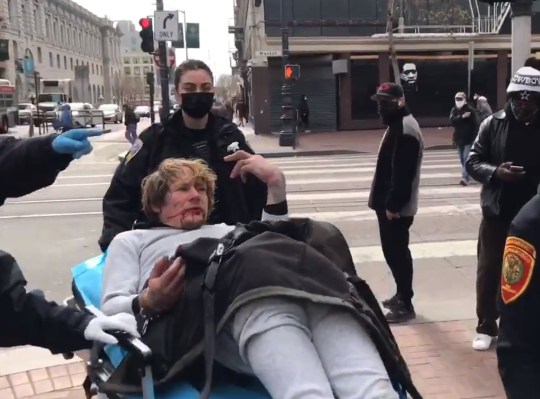 Steven Jenkins, 39, is accused of attacking Xie and another elderly Asian in the same area of San Francisco (Picture: KPIX 5)

Chen said his grandmother believed the money must be donated ‘back to the Asian American community’.

He said: ‘This is my grandma, grandpa and our family’s decision. We hope everyone can understand our decision.’

Xie was attacked last Wednesday, allegedly by Jenkins, and suffered heavily bruised black eyes, a swollen wrist, and according to her daughter, Dong-Mei Li, unstable mental health from the trauma of the incident.

Speaking to KPIX 5, Xie, who who has lived in the city for 26 years, said her immediate instinct was to fight back. 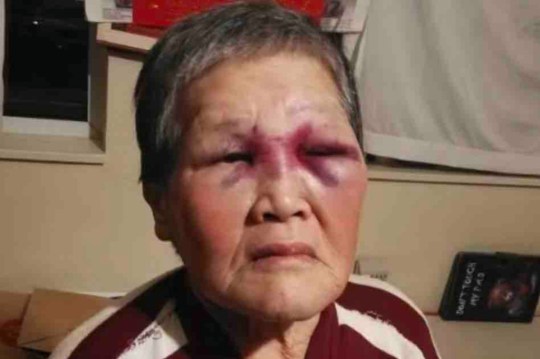 Xie suffered heavy bruising to her face when she was punched, unprovoked, allegedly by Jenkins (Picture: GoFundMe)

Li told the station after the attack that her mother is ‘Very traumatized, very scared and this eye is still bleeding’.

Li added: ‘She found the stick around the area and fought back’, stating that her mom still can’t see out of her left eye after the senseless crime.

Video footage posted on Twitter of the aftermath of the incident, captured by KPIX’s Dennis O’Donnell, Xie can be seen distressed and bruised as Jenkins is being wheeled away on a stretcher.

San Francisco Police Department arrested the suspect, Jenkins at the scene and have charged him with assault likely to produce great bodily injury and two charges of elder abuse.

The other victim, Pham, continues to recover from his injuries, which included a fractured nose and possibly-fractured neck. A GoFundMe fundraising page for Pham to raise money to pay for medical costs has so far raised $279,000.

Hate crimes against Asian Americans rose 150% in 2020, even as hate crimes overall declined and according to the group Stop AAPI Hate, during the past year there have been nearly 4,000 hate incidents against Asians nationwide in the US.

Mysterious blobs of rock beneath Earth’s surface may belong to an ALIEN planet, study claims