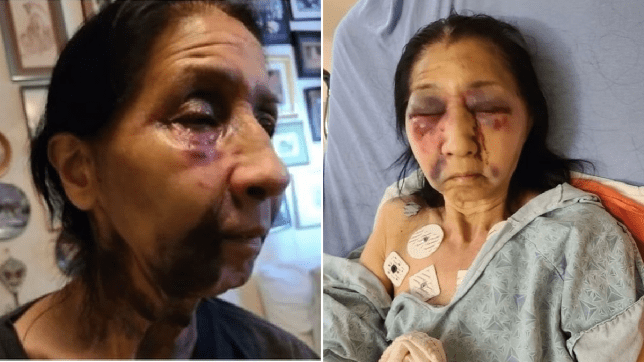 A 70-year-old Mexican American woman was brutally beaten on a bus by an assailant who hurled an anti-Chinese slur (Pictures: Instagram)

A 70-year-old grandmother was beaten and dragged across a bus by an attacker who allegedly mistook her as Asian, amid a rash of hate crimes against people of that background.

The grandmother, who is Mexican American and identified only as Becky, was trying to get off a city bus in Los Angeles, California, when another passenger described as a black woman 25 to 30 years old hit her with an anti-Chinese slur, according to The Eastsider.

Then the attacker reportedly pulled the grandmother to the front of the bus and beat her up last Friday afternoon. Becky suffered a concussion and a broken nose, her son Pete said, and her eyes and face were swollen and some of her hair pulled out.

‘Nobody would help’, Pete said. ‘Not even the bus driver’.

It wasn’t until another passenger called 911 that the beating stopped, the son said.

Becky spent 24 hours at a hospital and was discharged but has difficulty walking because her legs were bruised. Images showed Becky with purple bruises around her eyes and mouth. She has pre-existing health conditions including lupus and arthritis.

Pete said that his mother and the whole family are often mistaken as Asian and have long been residents of the Highland Park neighborhood. Becky was trying to get off the bus near a Vons market to shop for her granddaughter, Pete said.

Yasmine Beasley, 23, was arrested and faces felony battery charges in connection with the attack, a police official told the Los Angeles Times.

It was not immediately clear whether hate crime charges will be brought against Beasley.

The attack on Becky comes as a wave of racist attacks against Asians continue to happen across the US. A month ago, six of eight victims in a series of mass shootings at three Atlanta area spas were Asian women.