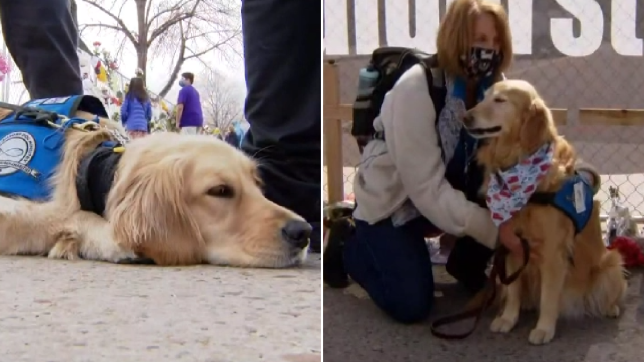 A comfort golden retriever called Cubby has arrived to help soothe survivors of Monday’s massacre at a Colorado supermarket that killed 10 (Pictures: 9News)

A golden retriever called Cubby has been drafted in to help comfort survivors of the Colorado supermarket massacre. The six year-old dog was taken to King Soopers supermarket in Boulder on Wednesday, with mourners encourage to hug and pet her.

A local Lutheran Church volunteer called Carol, who brought Cubby to the murder scene, said: ‘You’re welcome to pet her, yes. She likes to hug, and she likes to listen to secrets if you have anything you want to talk to her about.’

Bonnie Fear, the K-9 response coordinator responsible for Cubby, says emotional support animals like the dog provide an important service in the wake of tragedies.

She told 9News: ‘They take on people’s feelings. We bring the dogs and bring comfort and smiles and just open up emotions for people so they can start the healing process.

‘People think it’s not going to happen here and I heard that, ‘It can’t happen here,’ but it did it really did hit home, and we were devastated for the community.

‘Yet we know we need to show up, we know we want to be strong for these people, and for them to know we’re very sorry for what happened. We care and we love them and through these dogs, we can do that.’

Other religious groups have sent chaplains to help people pray in the wake of the killings. 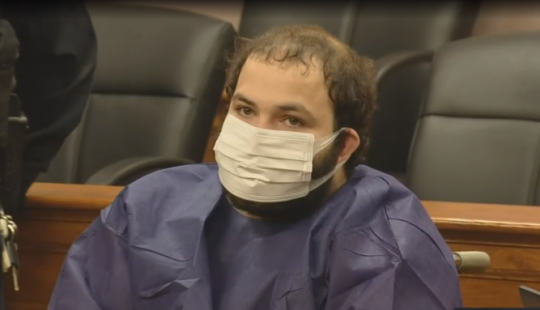 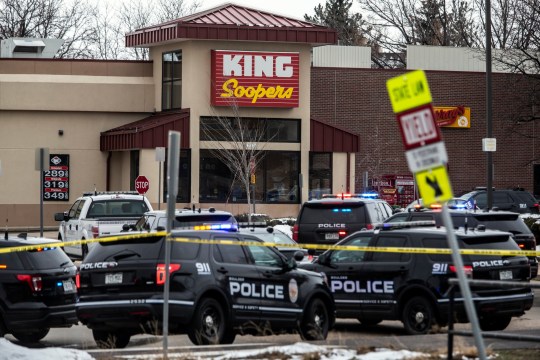 Alissa is accused of killing 10 people aged between 21 and 65 at the King Soopers supermarket in Boulder, Colorado, pictured, on Monday (Picture: Getty)

He was taken to court in a mask and blue jumpsuit for the in-person hearing, and was ordered held in custody until his next court date.

Those killed on Monday ranged in age from 20 to 65, and included the first police officer called to the scene, father of seven Eric Talley, 51.

One of the female victims was shot shortly after getting to the front of the line for her Covid vaccine, which the supermarket was helping distribute.

No motive for the killings has been given, with family members described Alissa as a loner who suffered from paranoid delusions.

Sister Wives’ Meri Brown Posts About ‘Worth’ Amid Marriage Issues