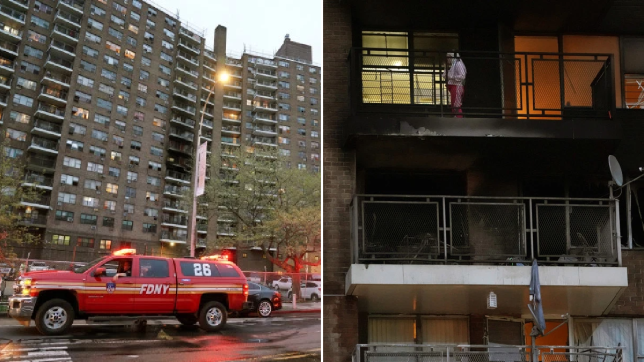 An eight-year-old girl jumped down from the sixth-floor balcony of a high-rise building in New York City to escape a fire (Pictures: New York Post)

An eight-year-old girl leaped from the sixth floor balcony of a high-rise building to escape a fire and broke both of her legs.

The girl was trapped by the fire that broke out around 6pm on Wednesday at a 17-story Bronx residential complex in New York City, officials told the New York Post. Video footage showed flames and black smoke coming out of a window. The girl jumped from the balcony, police sources told the newspaper.

She landed on dirt instead of pavement, and the comparatively softer ground may have saved her life, a fire chief told WABC.

‘She must’ve been really horrified, you know, nervous, scared,’ Jessica Ocasio, who lives directly above the girl’s apartment, told the TV station. ‘It’s horrible, you know, for anybody to experience something like that.’

‘When that child was there, that was my call to do what we do as human beings, and that was protect that baby that was on the floor,’ Kemp told WABC. ‘I don’t know how the sleep is going to be tonight, but it’s going to be a prayerful one because I’m going to pray that she recovers, and that she be all right.’

The girl was rushed to Harlem Hospital and was in critical but stable condition, officials said on Thursday afternoon. Her 17-year-old aunt was smoking outside when the blaze began, sources told the Post. The aunt apparently attempted to save the young girl but could not go back in due to heavy smoke.

‘Life, life, you know,’ neighbor Pedro Diodonet told the TV station. ‘When you want to live, you’ll just about do anything.’

Besides the girl, another adult in the same apartment and seven firefighters suffered minor injuries. More than 100 firefighters responded to the scene.

The cause of the fire at the building on East 169th Street by Third Avenue in the Morrisania neighborhood was not immediately known and is being investigated by fire marshals.

Why is there a Premier League social media blackout and who is taking part?