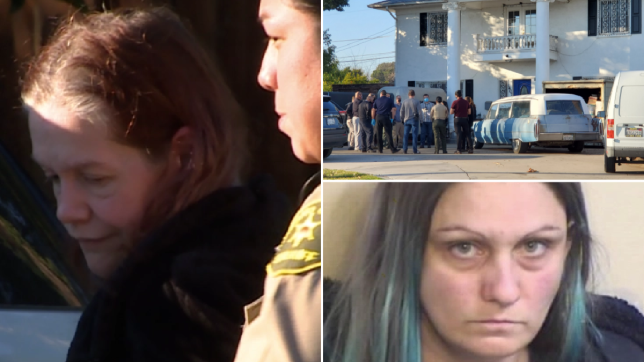 Tammy Shreiner, main photo, is accused of moving her 12 year-old into a death-themed mansion after starting a throuple. She and girlfriend Jillian Cox, bottom right, are accused of helping Cox’s spouse Brent Cos molest the girl (Pictures: Fresno County Sheriff’s Office/Fox26)

A mother started a three-way relationship with a couple living in a death-themed mansion, then helped her lover abuse her 12 year-old daughter, it is claimed. Tammy Shreiner, 38, is accused of agreeing to a throuple with Brent Cox, 41, and his wife Jillian, 36, last year.

Shreiner then moved into the Cox’s dilapidated mansion in Fresno, California, complete with a baby blue hearse containing a casket parked on its drive. The house also has a car parked outside with a model skeleton sitting in one of its drivers seats.

After beginning the relationship Shreiner and Jillian Cox – are said to have turned a blind eye as Brent Cox groomed and abused Shreiner’s daughter. The mom has been herself been accused of a sex crime, with Brent Cox also alleged to have filmed much of the abuse. The trio were arrested last week.

Fresno County Sheriff’s Lieutenant Brandon Pursell said of the child sex abuse images his detectives had discovered were ‘horrific.’ He told the Fresno Bee: ‘This content is absolutely terrible.’ 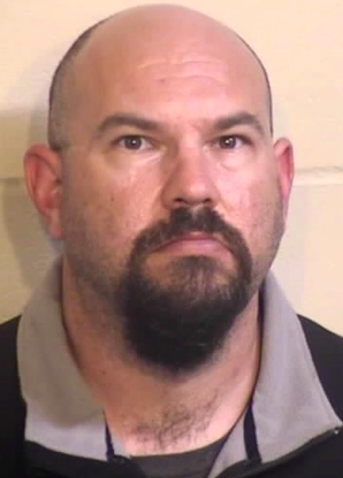 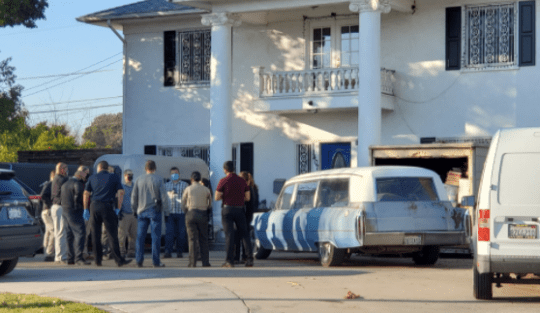 The Cox’s lived at a dilapidated death-themed mansion, complete with a baby blue hearse parked on its drive (Picture: Fresno County Sheriff’s Office)

‘We have tens of thousands of images and videos to go through and review. And once we reach a certain threshold, that will increase the charges and (increase) Mr Cox’s bail.’

The Cox’s and Shreiner were arrested on February 4 on suspicion of sexually abusing the girl after a tip-off from an unidentified outside source.

Explaining the women’s alleged involvement in the crimes, Pursell told Fox26: ‘They knowingly participated and they knowingly engaged in this.’

A subsequent investigation of their electronic devices has led detectives to add child pornography charges to Brent Cox’s rap sheet. 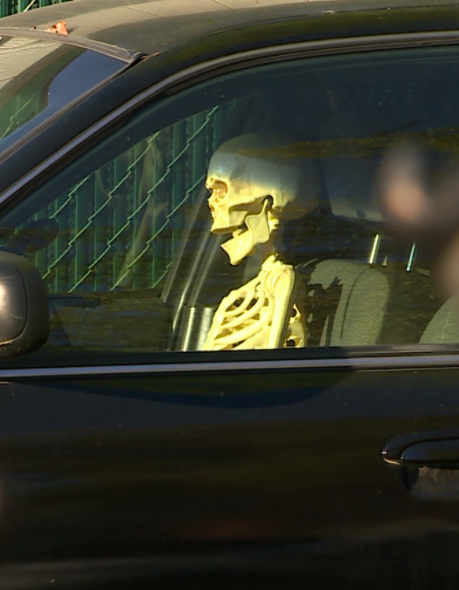 A model skeleton was also snapped inside a car parked on the Cox’s drive (Picture: Fox26)

His wife has also been charged for allegedly turning a blind eye to her spouse’s illicit weapons stash.

Pursell said: ‘Their horrific actions with this child are what are going to put them in jail and hopefully keep them in jail for a long time.’

The girl said to have been abused was removed from the Cox’s home early in the investigation, and is now said to be in a safe place.

Her mom and the Cox’s are all being held in jail ahead of their next court appearance.

Heathrow packed as jetsetters rush to get back to Britain