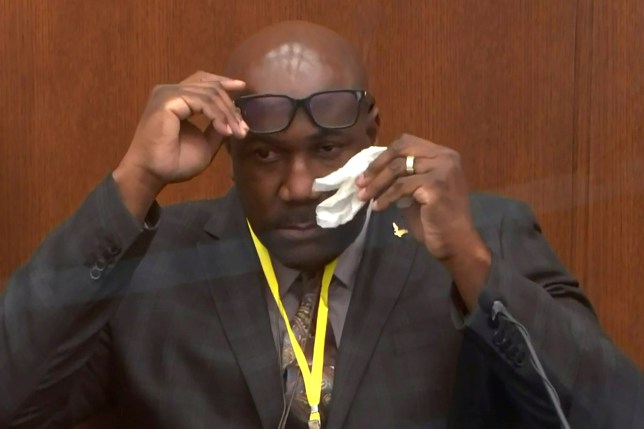 Philonise Floyd speaks about his brother as he answers questions during the eleventh day of the trial of former Minneapolis police officer Derek Chauvin (Picture: Reuters)

George Floyd’s younger brother characterized him as a ‘leader’ in their household and a family man who was deeply hurt by his mother’s death. Philonise Floyd, 39, teared up as he testified Monday on the eleventh day of former Minneapolis police Officer Derek Chauvin’s trial in the black man’s death.

Philonise spoke to the jury about growing up with George, 46, as prosecutors showed photographs of him from his childhood to fatherhood. There was a photo of George’s mother holding him, one of him as a teenager reading a textbook, another of him playing basketball at South Florida Community College, and one of him carrying his daughter Gianna.

George’s brother choked back tears at the sight of a picture of George with his mother, who died in 2018.

Philonise said that George ‘was so much a leader to us in the household’.

‘He would always make sure we had our clothes for school’, Philonise said. ‘He made sure we all were going to be to school on time’.

George’s brother added that ‘people would attend church just because he was there’ and that George ‘was just like a person that everybody loved in the community’.

George ‘showed us how to treat our mom and how to respect our mom’ and ‘loved her so dearly’, Philonise said.

Philonise was a ‘spark of life’ witness, as Minnesota law uniquely allows the victim’s family to talk about them on a personal note. The defense team chose not to cross-examine him.

On the fourth day of Chauvin’s trial, George’s girlfriend Courteney Ross, 45, similarly testified that he was ‘broken’ after his mother’s death and ‘seemed kind of like a shell of himself’.

Too Close on ITV: Cast, time and how many episodes are there?