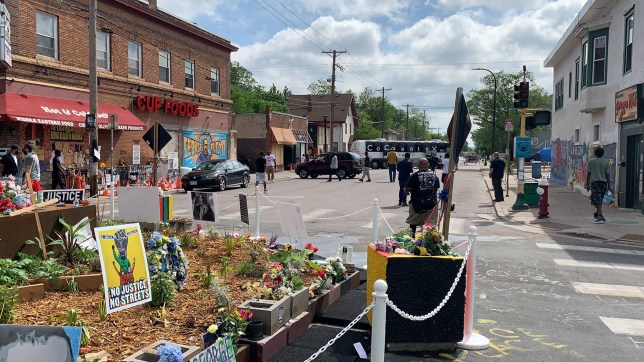 Gunshots were heard at George Floyd Square on the one-year anniversary of his death (Picture: Twitter @PhilipinDC

Multiple gunshots were reportedly heard at George Floyd Square in Minneapolis, Minnesota, on the one-year anniversary of the black man’s death.

Several reporters at the memorial site at the intersection of East 38th Street and Chicago Avenue where protests have been ongoing said they heard what they believe were shots on Tuesday morning.

Journalist Molly Hennessy-Fiske tweeted a photo of the scene and wrote, ‘Was just walking to #GeorgeFloyd square when gunshots sounded’.

‘One volley, then two, then three. Many bystanders,’ Hennessy-Fiske said. ‘People couldn’t tell if it was fireworks at first. It was right in the square.’

Was just walking to #GeorgeFloyd square when gunshots sounded. One volley, then two, then three. Many bystanders. People couldnât tell if it was fireworks at first. It was right in the square. pic.twitter.com/uW5rLIzJw1

An affiliate reporter for Associated Press GMS, Philip Crowther, wrote that ‘a few (dozen) shots’ were fired on the block and posted a photo showing Cup Foods, the South Minneapolis grocery store where Floyd allegedly used a counterfeit $20 bill before being arrested on May 25, 2020.

‘Everyone sheltered in place. Lots of running. No apparent need for medics,’ Crowther tweeted.

We heard a few dozens sounds of what appear to have been shots fired on this block. Everyone sheltered in place. Lots of running. No apparent need for medics. Will update. pic.twitter.com/tpDY9etN8I

Crowther added that there was one broken window ‘apparently from one of the shots fired’ and that reporters at the square agreed that ‘we heard anywhere between a dozen and two dozen shots fired’.

He also tweeted a 15-second clip from the square in the aftermath showing that it was ‘quiet now’ but that people were still sheltering in place. Crowther then shared a minute of rough footage of the moment in which shots could be heard.

‘We counted 30 upon looking back at the footage,’ Crowther tweeted.

Quick rough footage of the moment we heard shots fired at George Floyd Square. We counted 30 upon looking back at the footage. pic.twitter.com/oxGkLQru9Q

BBC correspondent Barbara Plett Usher tweeted that it was not clear what exactly happened but provided an initial picture.

‘Unknown gunmen fired at the square from outside the perimeter. Local patrol shot back and gave chase. Speculation that gang related,’ she tweeted.

All clear re shooting but not clear what happened. Initial picture: unknown gunmen fired at the square from outside the perimeter. Local patrol shot back and gave chase. Speculation that gang related

Three other Minneapolis police officers, J Alexander Keung, Thomas Lane and Tou Thao, are accused of aiding and abetting Chauvin. Hennepin County Judge Peter Cahill postponed their trial from August 23 to March 2022 to allow a federal case against them and Chauvin to first play out first.

A rally remembering Floyd took place in Minneapolis on Sunday, with hundreds fathering outside the Hennepin County Government Center. Family members of Floyd, a father of five, were present as marchers held signs and pictures of him.

Virtua Fighter 5: Ultimate Showdown is PS4 exclusive – out in June

Lil Nas X talks ‘SNL’ wardrobe malfunction: “I was like, ‘Please God, no!'”