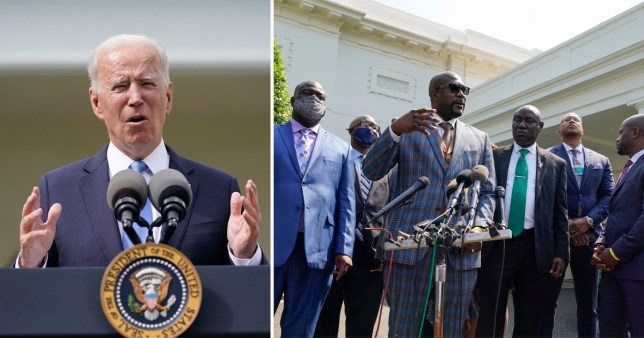 George Floyd’s family emerged from a meeting with President Joe Biden on the one-year anniversary of the black man’s death hopeful that the president will sign a policing reform bill named after him.

‘It was a remembrance of what happened to my brother,’ said Philonise, according to The Star Tribune. Philonise added of the meeting with Biden: ‘It was great, he’s a genuine guy.’

Floyd’s family spoke with reporters outside the White House after the meeting and urged Congress to pass the George Floyd Justice in Policing Act.

Biden told the family ‘he just wants the bill to be meaningful and that it holds George’s legacy intact’, according to George’s nephew Brandon Williams.

The Floyd family’s lawyer Ben Crump said the meeting was ‘very personal’ because Biden got to know them in the past year.

Crump said Biden assured the family that he would sign the George Floyd Justice in Policing Act ‘any day’. The act would address ‘a wide range of policies and issues regarding policing practices and law enforcement accountability’ and prohibit unnecessary use of force.

‘He said that he doesn’t want to sign a bill that doesn’t have substance and meaning, so he is going to be patient to make sure it’s the right bill, not a rushed bill,’ Crump said.

Shortly before the meeting with Floyd family members, Biden tweeted that ‘we face an inflection point’ and ‘we have to act’.

‘It’s been one year since George Floyd was murdered. In that time, George’s family has shown extraordinary courage,’ Biden tweeted.

The president added that ‘last month’s conviction was a step towards justice – but we cannot stop there’, referring to a jury finding former Minneapolis police officer Derek Chauvin guilty of all charges against him.

Itâs been one year since George Floyd was murdered. In that time, Georgeâs family has shown extraordinary courage. Last monthâs conviction was a step towards justice â but we cannot stop there.

We face an inflection point. We have to act.

White House Press Secretary Jen Psaki told reporters that she believed much of the meeting would be Biden ‘listening to them and hearing from them on what they want the path forward to look like’.

‘He really wanted it to be a private meeting because he has a personal relationship and he wanted to hear how they’re doing, give them an update on his efforts to sign a bill into law and ensure there is long-overdue accountability,’ Psaki said.

Katy Perry Is Saving Her Most Iconic Clothes for Daughter Daisy