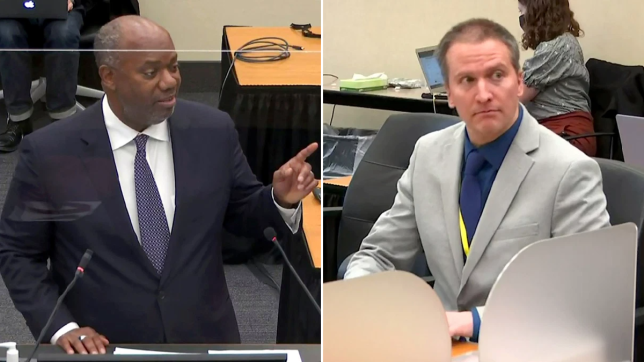 George Floyd died not because his heart was too big or other underlying health issues, but because former Minneapolis police Officer Derek Chauvin’s ‘heart was too small’, a prosecutor concluded.

In his rebuttal to the defense team’s closing arguments, prosecutor Jerry Blackwell told jurors that the largest departure from the truth were the defense’s claims that Floyd died of factors other than Chauvin kneeling on him for nine minutes and 29 seconds.

‘You were told, for example, that Mr Floyd died because his heart was too big, you heard that testimony’, Blackwell said on Monday afternoon. ‘The truth of the matter is that the reason George Floyd is dead is because Mr Chauvin’s heart was too small’.

Blackwell offered that as one of numerous ‘stories’ he claimed the defense team crafted to steer jurors away from the ‘truth’ that Floyd died of Chauvin’s deadly force.

‘What you have gotten here is a number of what I call stories that once you analyze them and against the facts and evidence that you’ve heard, you’ll see what I mean’, Blackwell said.

While prosecutor Steve Schleicher in his closing remarks repeatedly brought up the ‘nine minutes and 29 seconds’ of kneeling, Nelson asked jurors to think about what happened leading up to that time.

Nelson noted that the jury instructions state that no crime was committed if a police officer used reasonable force when justified. He told jurors to consider what ‘a reasonable police officer in the same situation would believe to be necessary’. Nelson mentioned surrounding traffic and bystanders at the scene.

‘Do not let yourselves be misled by a single still frame image’, Nelson said. ‘Put the evidence in its proper context’.

Nelson concluded that ‘the state has failed to prove its case beyond a reasonable doubt, and therefore Mr. Chauvin should be found not guilty of all counts’.

Chauvin is charged with second-degree unintentional murder, third-degree murder and second-degree manslaughter. He removed his mask at the start of Nelson’s closing arguments, perhaps an attempt to humanize himself.

Chauvin’s fate now rests with 12 Minneapolis jurors deliberating. A decision could come in hours, days, or even weeks.