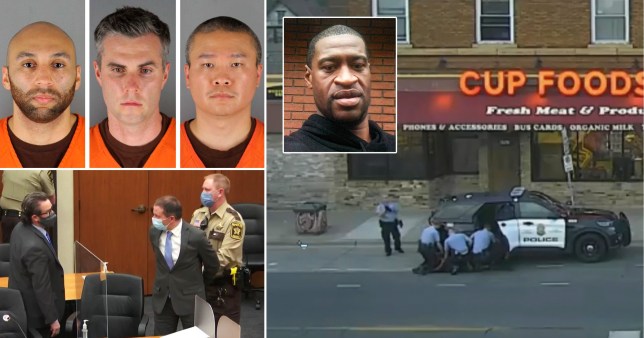 The jury accused ex-cops Derek Chauvin, Thomas Lane, J Kueng and Tou Thao of violating Floyd’s constitutional rights when they restrained him face-down on the ground as he said, ‘I can’t breathe’, indictments unsealed on Friday stated.

Three of the former officers – Chauvin, Keung and Thao – were charged with violating Floyd’s right to be free from unreasonable seizure and excessive force. All four ex-cops were charged for failing to give medical care to Floyd.

Chauvin, who was found guilty last month of all three charges against him for killing Floyd, faced a second indictment the other three ex-cops did not, related to arresting and restraining a 14-year-old boy by his neck in 2017.

Lane, Keung and Thao appeared in a videoconference with the US District Court of Minneapolis on Friday, while Chauvin did not.

A jury on April 20 convicted Chauvin of second-degree unintentional murder, third-degree murder and second-degree manslaughter, after deliberating for more than 10 hours. Chauvin waits for his sentencing in Minnesota’s only maximum-security prison.

Meanwhile, the other three ex-cops are free on bond as they await a state trial in August.

Chauvin’s lawyer Eric Nelson had no comment on Friday on the new federal charges against his client.

Floyd, 46, died on May 25 after Chauvin knelt on his neck as he was handcuffed and held to the ground outside of the Cup Foods store in south Minneapolis. State prosecutors said that Keung knelt on Floyd’s back and that Lane held his legs, while Thao stopped bystanders from intervening during the 9 1/2-minute ordeal recorded on video.

During Chauvin’s murder trial, Nelson that Floyd died of drug use and underlying health issues and that his client displayed a reasonable use of force in the struggle.

On Tuesday, Nelson filed a motion for a new trial, arguing that publicity around the high-profile case affected Chauvin’s right to a fair trial.