This is the horrific moment a huge truck crashes into the back of other vehicles during a 100-vehicle pile-up that has killed at least five people.

The terrifying footage shows a FedEx truck ploughing into vehicles that had already crashed in icy conditions on a freeway in Fort Worth, Texas, at around 7am this morning.

Officials have confirmed that at least five people have been killed in the pile-up and another 36 have been taken to hospital with injuries.

Some people are critically hurt and Fort Worth Fire Department has said that many people are still stuck inside their vehicles. 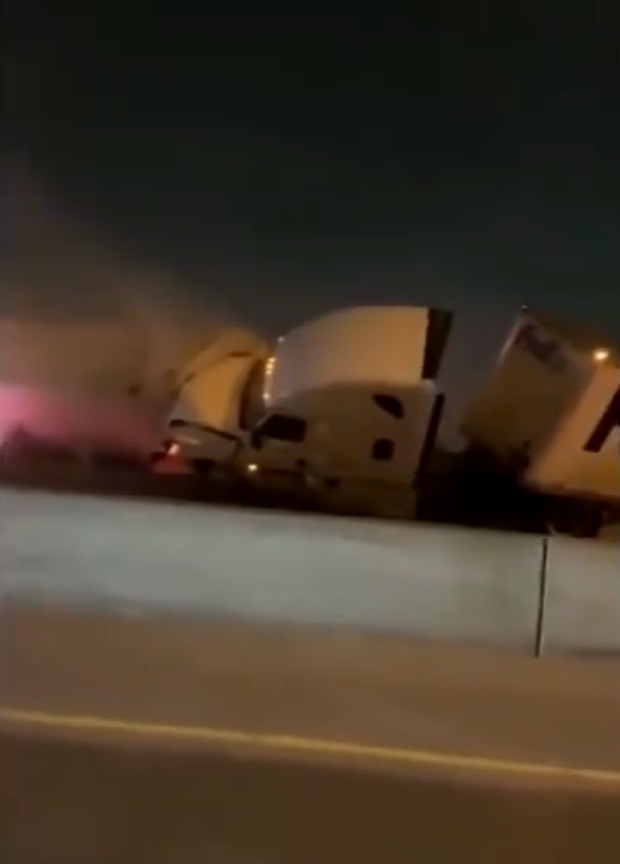 Mobile phone footage posted on social media shows the moment the truck smashes into the back of the pile-up (Picture: Twitter)

The footage, posted on Twitter, shows the truck hit another truck that was involved in the pile-up after failing to stop.

Photos from the scene show vehicles – including huge lorries and pick-up trucks – can be seen strewn across the road and piled on top of one and another.

Mike Drivdahl, of Fort Worth Fire Department, said firefighters are going car-to-car looking for people who are trapped or who are in need of medical attention.

Other footage from the scene shows car after car crash into the pile-up before sunrise as drivers fail to negotiate the icy conditions.

The sound of crumpling metal can be heard in the clip and vehicles collide into one and other.

Emergency services are still working to free people who have been trapped in vehicles and as many as 24 fire department crews have bee deployed to the scene.

MedStar have also responded and are involved in transported injured people to nearby hospitals.

Police have said there has been a family reunification center set up at the Riverside Community Center set up in Fort Worth and family members should go to that location to pick up victims who were involved in the crash.

3 Ways Employee Training Will Change in 2021