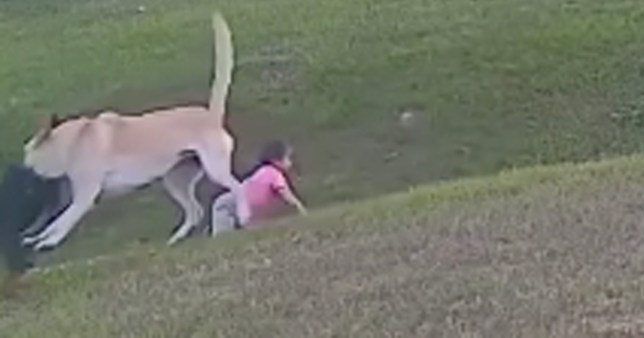 The German shepherd was praised for its quick actions (Picture: @flodaboy1/Tiktok)

This is the disturbing moment a German shepherd had to come to the rescue of a young boy being attacked by the neighbour’s dog.

CCTV footage shows the six-year-old running out of his house in the US state of Florida to play with his pet, Tank.

Moments after, a large black dog can be seen charging towards the youngster from across the street.

As the dog looks like it is about to jump on the child, Tank pushes him down and covers him with his body before seamlessly redirecting the aggressor away from him.

After chasing the other dog away to a safe distance, Tank appears turn around to check the boy is unharmed.

A third dog can then be seen running out of the boy’s house also protecting its little owner. 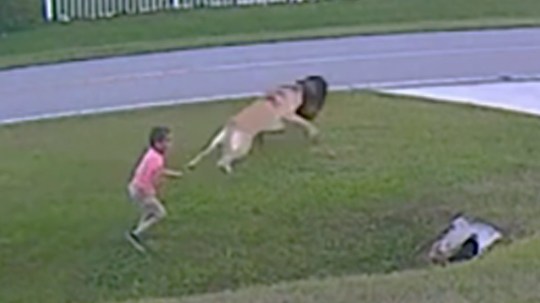 The little boy then runs back into his mum’s hands (Picture: @flodaboy1/Tiktok)

Another dog can also be seen coming out of the house to help (Picture: @flodaboy1/Tiktok)

A video of the incident was shared on TikTok by the child’s mum, and has since gathered nearly 24 million views.

The caption read: ‘Our neighbour’s dog randomly charged at my son last night and my Tanky saved him from getting mauled or worst.’

The mum later posted another clip of the brave dog playing with a chew toy, describing him as ‘the man, the myth, the legend’.

She wrote: ‘This is Tank and no, he is not professionally trained. He is just a man with killer instincts, who loves a good chew toy.’

People on the app praised the two dogs for their intelligence and protective instincts that kicked in at the right moment.

One woman commented: ‘The best boy. I would feed him steak for a week straight if mine did that. You are blessed to have him.’

German Shepherds are known to be smart, highly adaptable and friendly with children.

I’m A Celebrity: Charlene White under fire for ‘breaking rules’