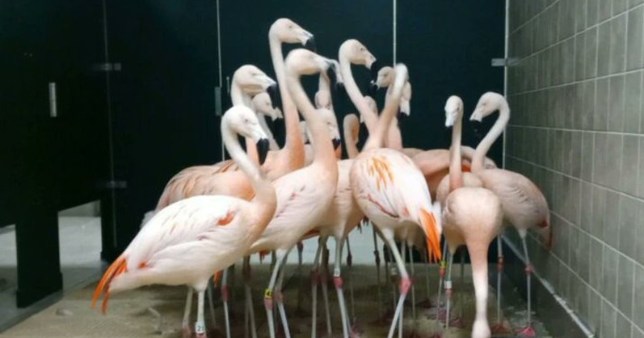 A flamboyance of flamingos hunkered down inside a park bathroom Wednesday as Hurricane Ian tore through the state of Florida.

The flamingos at St Petersburg’s Sunken Gardens waited out the Category 4 hurricane’s powerful wind gusts and flooding from the safety of a bathroom inside the park.

‘Our animals are safe w/staff on site to see them through the storm,’ Sunken Gardens tweeted Wednesday.

‘The flamingos are having a hurricane party in the bathroom; eating, drinking, & dancing.’

ð¦©ðWe’re hunkered down! Our animals are safe w/staff on site to see them through the storm.
The flamingos are having a hurricane party in the bathroom; eating, drinking, & dancing. ð

Stay safe out there! pic.twitter.com/ejCuuRUdma

The beloved birds were made comfortable in the bathroom, where they were left with a big food dish and a water dish, photos shared to social media show.

Sunken Gardens is St Pete’s oldest museum and a ‘botanical paradise’ amid a bustling city, according to the garden’s website. The classic attraction has been owned by the city since 1911, and is home to some of the oldest tropical plants in the region.

The roadside attraction is also home to flowers and animals like butterflies, turtles, and birds, like the flamingos. 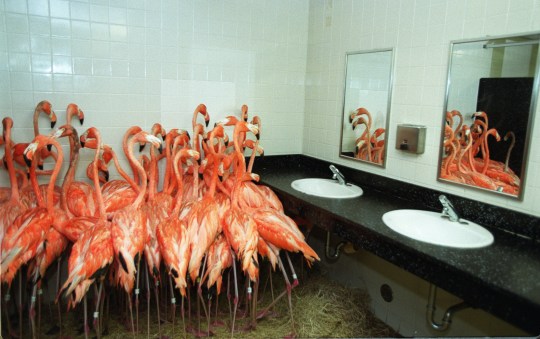 Flamingos take refuge in a bathroom at Miami-Metro Zoo during a hurricane on September 14, 1999 (Picture: News makers)

Hurricane Ian came crashing down in southern Florida Wednesday with 150 mph winds, storm surges, flooding and mass destruction. Still on Friday, millions of Florida residents are without electricity and are stranded in their homes amid the floodwaters.

The photo of the Sunken Gardens flamingos huddled in the bathroom is reminiscent of a now-famous photograph taken 30 years ago during another catastrophic hurricane in Southern Florida.

A photo taken by Ron Magill, at Zoo Miami, showed dozens of pink flamingos clustered together similarly in the bathroom during Hurricane Andrew, which was a historic Category 5 storm.

Magill shared the photo to Twitter, noting ‘of the countless images I have captured in my life, none is more iconic than this one.’

Of the countless images I have captured in my life, none is more iconic than this one. I can’t believe it has been 30 years since Hurricane Andrew devastated South Florida. I’ll never forget capturing this image of the zoos flamingos huddled in the ladies restroom for protection. pic.twitter.com/iACXIBivSm

According to officials with Sunken Gardens, the flamingos remain safe inside the bathroom, while other animals in their care, such as the tortoises, have been moved into indoor accommodations for the duration of the storm.