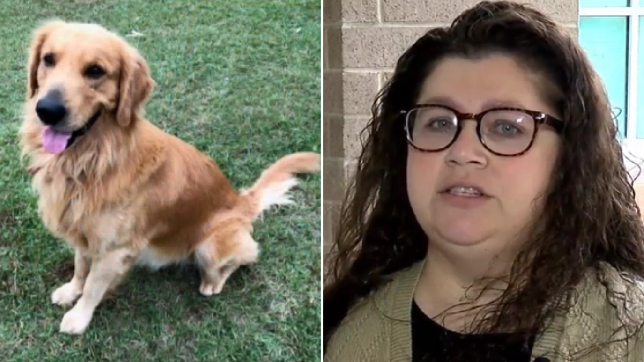 Kristal Butts is suing a local animal shelter for refusing to return her golden retriever Ogie. The shelter has accused her of mistreatment, and is counter-suing her for costs (Pictures: ABC15)

A family sued an animal shelter they claim renamed their lost golden retriever and refused to return him. Kristal Butts and her husband Jeremy say Grand Strand Golden Retriever Rescue (GSGRR) in Horry County, South Carolina, has refused to return their dog Ogie since he was sent to them after being found by a local shelter in December 2019.

Last week, GSGRR filed a counterclaim against the Butts’ insisting that they are Ogie’s rightful owners, and that they paid a $3,000 treatment bill for the dog, who appeared to have been hit by a car. Ogie was renamed Hampton by workers there, and remains in their custody.

They also accuse Kristal – a dog breeder – of mistreating Ogie. She vehemently denies the claim, insists the dog is her personal pet, and claims she is being targeted for breeding Ogie.

Ogie vanished from his home in Christmas Eve 2019. Kristal says she immediately began searching for her lost pet, and discovered the next day that he’d been taken in by a local animal shelter, Anderson County PAWS. Kristal says she had to wait until the shelter reopened after Christmas to collect Ogie. 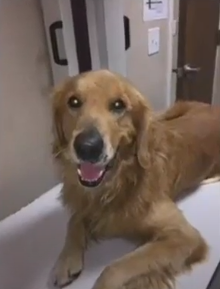 Ogie has since been renamed Hampton, with his case due to go to trial in May (Picture: ABC15)

She told ABC15 that she went to PAWS on December 27, only to discover that Ogie had been incorrectly transferred to GSGRR, a rescue that specializes in rehoming his breed.

The Butts first sued GSGRR in January 20. GSGRR say Ogie did not have a collar or tag, and that he had not been fitted with an identifying microchip.

Kristal Butt says she simply wants GSGRR to return Ogie. But its countersuit seeks cash for Ogie’s medical treatment and board.

A jury will decide the outcome of the case at a trial scheduled for May.

Larry King’s Widow Shawn King Contests His Will After Divorce