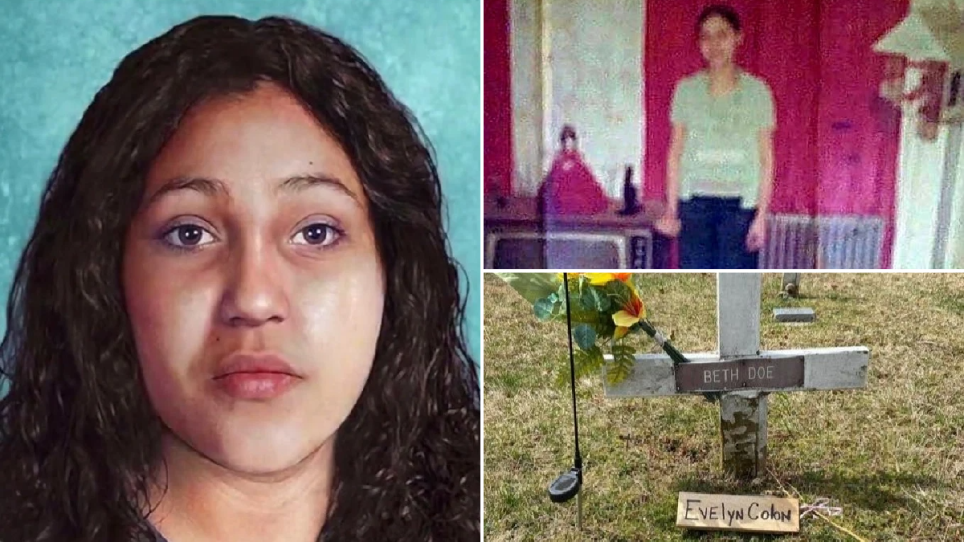 Evelyn Colon, left in a computer generated image, went missing from home in 1976 and her family thought she had gone away to live with her boyfriend (Picture: National Center for Missing & Exploited Children/family/NBC New York)

The family of teenager who went missing in 1976 thought she was ‘happily living a life of her own’ – only to find out 45 years later that she was brutally murdered allegedly by her boyfriend.

Evelyn Colon vanished from her home in Jersey City, New Jersey, in December 1976, 15 years old and heavily pregnant. Her family feared the worst, at least until they received a letter, one month later, from her boyfriend at the time, Luis Sierra. It said the couple and the baby had gone to live in Connecticut.

‘We were told she had moved on and was happy in a new life’, said Evelyn’s nephew, Luis Colon Jr. ‘He told our family that if Evelyn needed anything, she’d contact them.’

But Evelyn never did make contact, and despite years of hoping she would, her family now know why. Their dreams of Evelyn being surrounded by children of her own were shattered when Sierra, now 63, was arrested last month and accused of killing Evelyn. 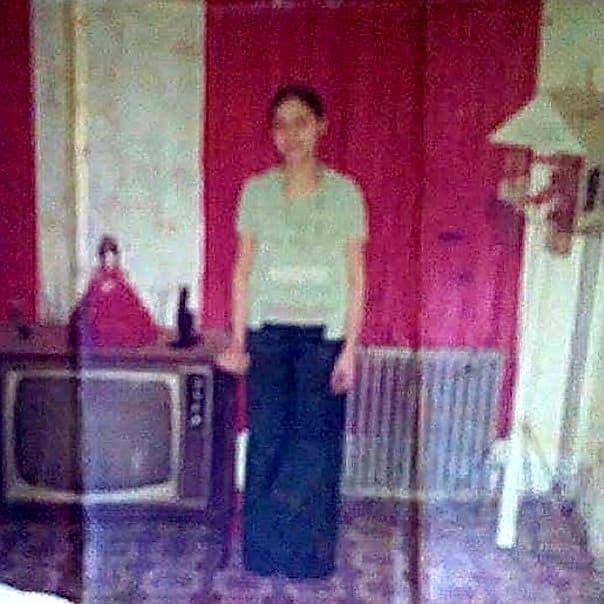 It turns out that Evelyn had not lived like her family imagined, and was in fact brutally murdered and dumped into a river in Pennsylvania shortly after going missing. Her remains went unidentified for four decades and she was known only as ‘Beth Doe’.

The dismembered teen – whose body parts were packed into suitcases – was formally identified as Evelyn in March by Pennsylvania State Police, after linking her nephew, Luis’s DNA from an ancestry website.

Speaking to metro.co.uk, Luis, 37, has told how his family is heartbroken, and never once imagined their beloved Evelyn had been killed all those years ago.

‘Our family honestly thought at the time that she was not a runaway’, Luis said. ‘They thought she moved in with him, was living with him. 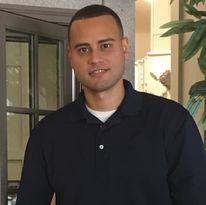 ‘It’s not normal to move away and not make contact with home but my family felt she wanted to start a new life. It never crossed our minds that anything bad had happened to her.

‘Her mom, my grandmother, felt guilty about it, as if it was her fault she went away. She wondered if it was something she did that drove her away. Sadly my gran died and never got an answer.

‘Her life was taken for her and she taken from us, she did love us, she did care about her family.

‘We were all stunned and heartbroken when we found out, it’s very difficult to explain how we felt about it. We thought she was living a successful life, but that opportunity was taken away from her.

‘She will be 15 forever, it has devastated our whole family. I never had chance to meet her, but I’ve always felt like we’ve had a connection.’

Evelyn’s tragic fate was uncovered earlier this year thanks to Luis’s desire to track his aunt down, in the hope of reconnecting his family with their long-lost relative. He said that at first he tried searching for Evelyn on social media, but when they got no luck, Luis decided to upload his DNA to an online ancestry website, in hopes of one day getting matched to her. 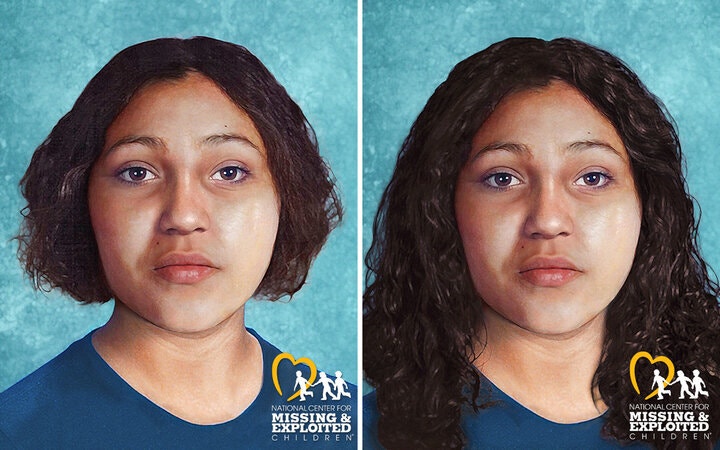 ‘I was first told about Evelyn when I was about six or seven years old’, said Luis, who is from Houston, Texas.

‘I knew my dad had another sister, and I was told she went away to live with her boyfriend. But I always thought that if she is looking for us and can’t find us, then I want to help.

‘I did the DNA test in late 2015, early 2016. I used to think about her a lot at Christmas, and I thought it’d be amazing to upload my DNA, hoping that she may do the same one day too.

‘I suppose I was imagining a happy ending’.

After more than four years of waiting, Luis’s search came to a tragic end when he was contacted by Pennsylvania police in March, saying that his DNA profile was a 99.9% match to that of the remains of a teenage girl, murdered in 1976, and known only as ‘Beth Doe’.

After questioning, Luis and detectives came to realize that ‘Beth Doe’ was in-fact Evelyn. Police told the family that Evelyn was killed, her body cut up and packed into suitcases and then tossed into the Lehigh River, in Pennsylvania, in December 1976.

Her unborn daughter, whom the family has now named Emily Grace, was cut from her womb, and Evelyn’s nose, ears and breasts had been removed. 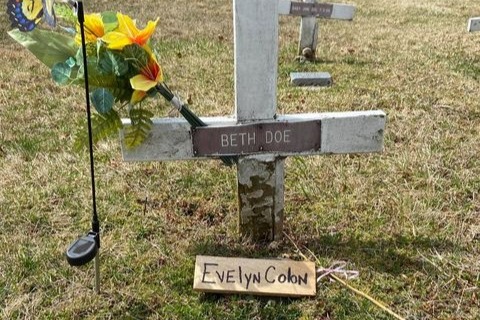 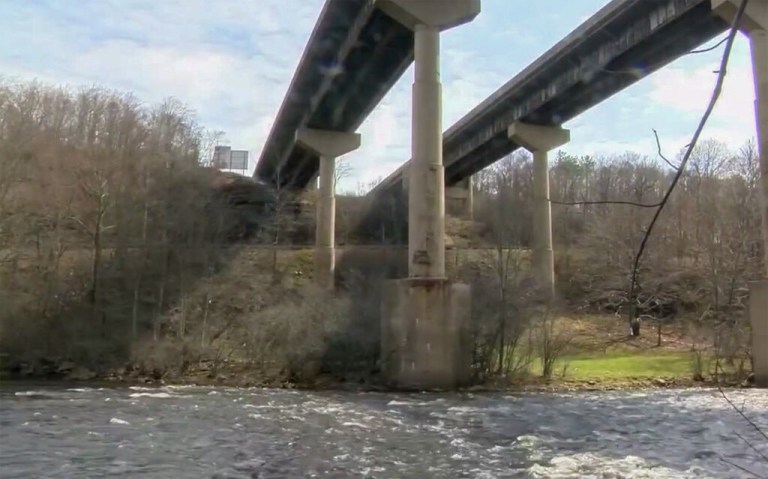 Evelyn was dumped off a bridge in Pennsylvania after being murdered (Picture: WBRE)

On March 31, Sierra, who was 19 years old at the time and was Evelyn’s live-in boyfriend in Jersey City, was arrested by police in connection with Evelyn’s killing. The Ozone Park, Queens native was charged with one count of criminal homicide and is awaiting extradition to Pennsylvania.

Luis added: ‘At the time, when I did the DNA test, I never thought something bad might have happened to her. And at the time, police did not even know who she was.

‘I have not yet processed everything properly, we are all stunned by how things have turned out.

‘I have been able to get answers, but we are saddened that the answer turned out to be that she was murdered.

‘He (Sierra) got away with it for 40 years. He took away her name for all those years’.

Evelyn’s family set up a GoFundMe page to raise money for a memorial for the murdered teen, who would have turned 60 years old in a few weeks time. 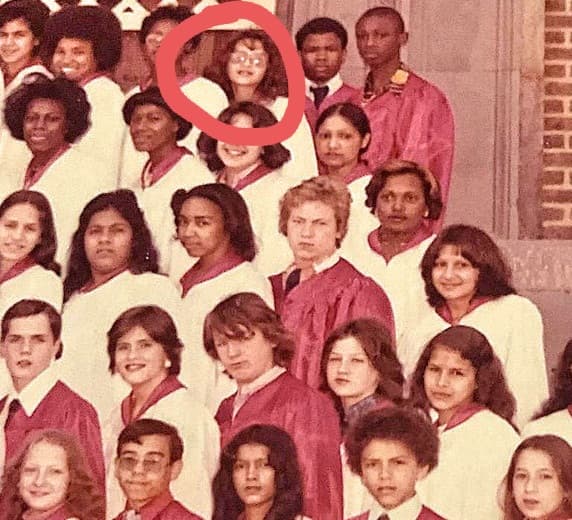 Evelyn, circled, pictured during a school graduation as a teenager (Picture: Colon family)

Sadly, Evelyn’s family has hardly any photos of her after their home suffered a devastating fire in 1975.

Her grave in rural Carbon County, Pennsylvania, now finally bears her name, as a block of wood with Evelyn Colon lays at the foot of a white cross reading Beth Doe.

A father of one, Luis said he and the family hope to honor Evelyn’s name and story by creating a nonprofit or similar organization to raise awareness around domestic violence and suffering.

‘My mission now is to honor Evelyn in the best way I can’, he said. ‘I want to create a website memorial for her, related to domestic violence’.

‘It’s important to tell this story so it doesn’t happen to anyone else.

‘If I can help just one person, just one girl, then at least something good will have come out of this’.