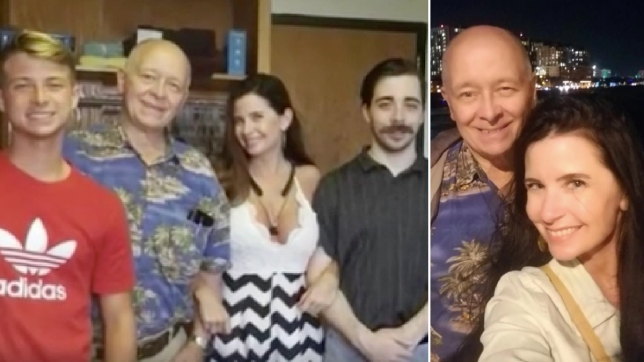 Chuck Conboy, pictured with his wife Maria and his sons, caught Covid twice in nine weeks – and says the second infection was far worse (Picture: KETV)

A family of four were horrified after they caught Covid twice in just nine weeks – and say the second infection was far worse. Chuck Conboy, 67, first contracted the virus in November, and says he was horrified when it left him unable to walk short distances without running out of breath.

Chuck, from Papillion in Nebraska, said: ‘I walked about 200 feet and I couldn’t breathe. And I mean, it was a panic feeling. I’ve never had anything like that in my life.’ The dad, his wife and his two young sons all fell ill with the virus, but eventually recovered – and hoped to have some immunity from another infection.

But late last month, Chuck woke up with a fever, and was distraught to realize he had Covid again. He said: ‘I woke up the next morning and had a fever, it jumped up to like 102 degrees for which, for me, that’s high. And I thought, “Oh, my god, not again.”

‘All the viruses I’ve had in my life, this is one of the top three, completely took me out completely. It just hit me like a truck. And this time, it knocked me down. In fact, this is the first day nine that I’m back to halfway normal. If you’d asked me yesterday, I didn’t even know where I was.’

Chuck fears he may have fallen victim to a different strain of Covid to the last type that infected him, and says his wife Maria and sons have also been infected again as well.

He said: ‘As far as the symptoms, they were much more severe, quickly setting, taste and smell disappeared immediately. Temperature shot up higher just immediately and this was not just me, this was entire family.’

Experts remain unsure about how long immunity lasts after a Covid patient recovers. Dr Mark Rupp from Nebraska Medicine told KETV that people who only suffer mild symptoms first time around may be at greater risk of a second infection.

He said: ‘We think most people that get Covid have natural immunity for several months.

‘But that may be one of the explanations, that people with very mild disease don’t mount as vigorous an immunological response and don’t have as long-lasting a response.’

Rupp says he and his colleagues are hopeful new Covid vaccines will provide recipients with decent immunity from multiple infections.

Royal Family Has ‘Benefits’ and ‘Negatives’