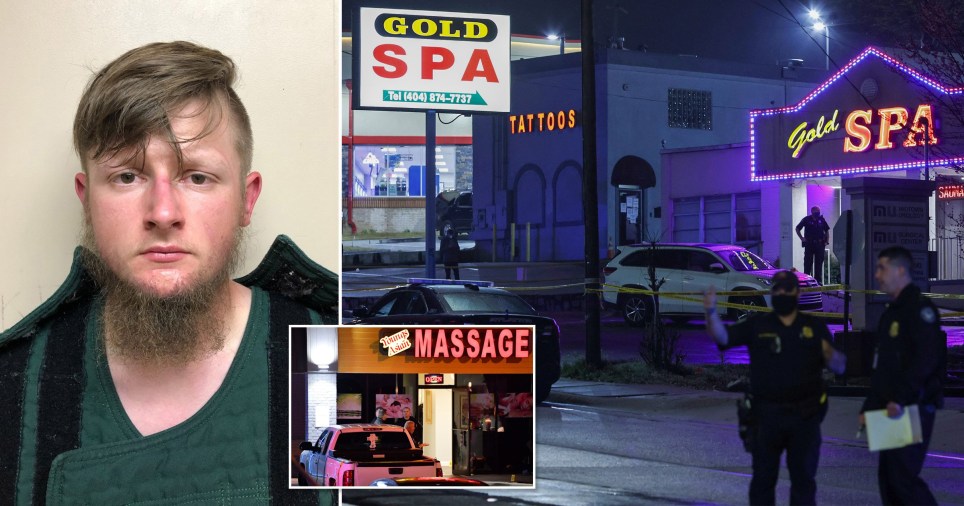 Robert Aaron Long was arrested after a dramatic police car chase where the suspect’s car was shunted off the road (Picture: AP / EPA / Reuters)

A 21-year-old man has been arrested after a two-hour massacre saw eight people shot dead at massage parlours in Atlanta.

Robert Aaron Long, of Woodstock in Georgia, was arrested last night after a dramatic police car chase which resulted in the suspect’s car being shunted off the road.

Cherokee County sheriff’s office spokesperson, Jay Baker, said Long was taken into custody around 150 miles away from the crime scene.

‘The suspect was taken into custody without incident… and transported to the Crisp County jail,’ Mr Baker said.

An Instagram account, believed to belong to Long, stated: ‘Pizza, guns, drums, music, family, and God. This pretty much sums up my life. It’s a pretty good life.’

A classmate of his from high school four years ago told the Daily Beast: ‘He was very innocent seeming and wouldn’t even cuss.

‘He was sorta nerdy and didn’t seem violent from what I remember.

‘He was a hunter and his father was a youth minister or pastor. He was big into religion.’ 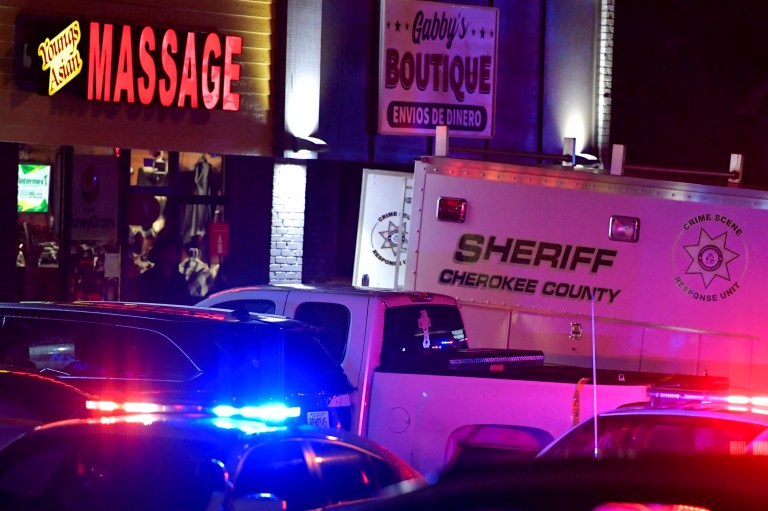 Five people were shot at Young’s Asian Massage in in Acworth, Georgia, around 5pm yesterday. Two people died at the scene and two died in hospital (Picture: AP) 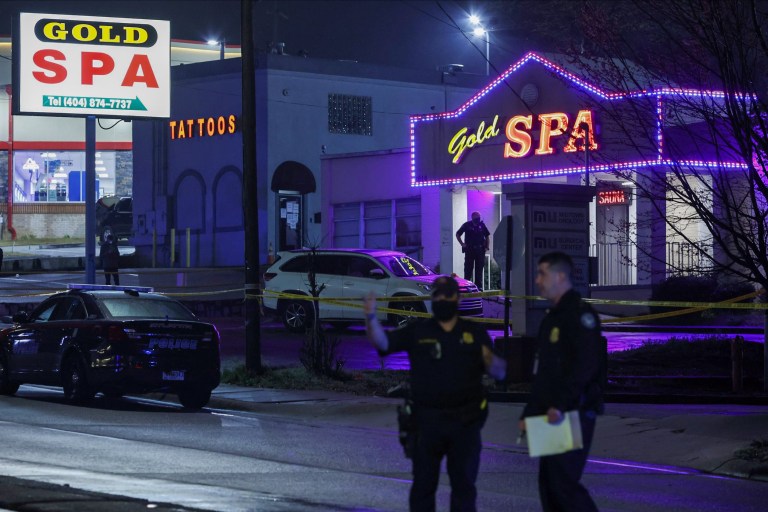 Three women were shot and killed at Gold Spa in Piedmont Road, around 30 miles away from the first shooting (Picture: Reuters) 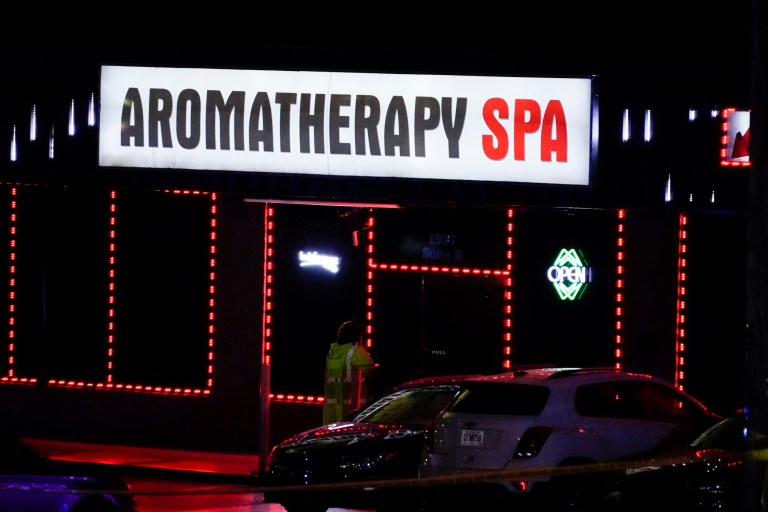 Another person was killed across Piedmont Road in Aromatherapy Spa (Picture: AP)

A youth pastor at the Crabapple First Baptist Church, located around half an hour away from the shootings, confirmed Long was the suspect and added it would give a statement shortly.

The eight people were killed in three separate shootings at two spas and a massage parlour in and around Atlanta.

In the first shooting two Asian women, one white woman and a white man were killed at Young’s Asian Massage, in the north of the city.

Then in short succession three Asian women were shot at Gold Spa, before another Asian woman was killed at Aromatherapy Spa. These parlours are around 30 miles away from the first.

The first massacre happened just before 5pm yesterday inside a parlour off Bells Ferry Road and Highway 92 in Acworth, Georgia around 30 miles away from Atlanta. 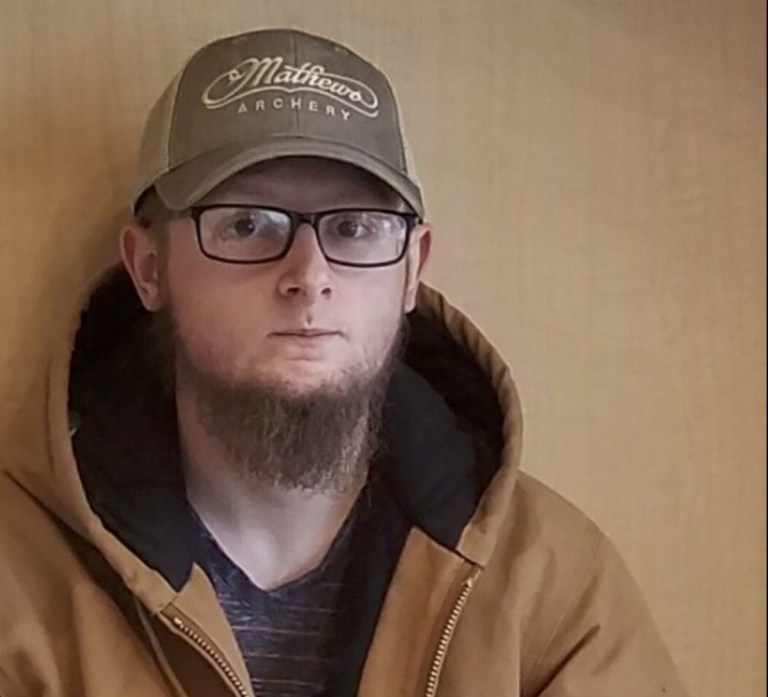 Robert Aaron Long, of Woodstock, has been taken into custody after being suspected of the shootings (Picture: AP) 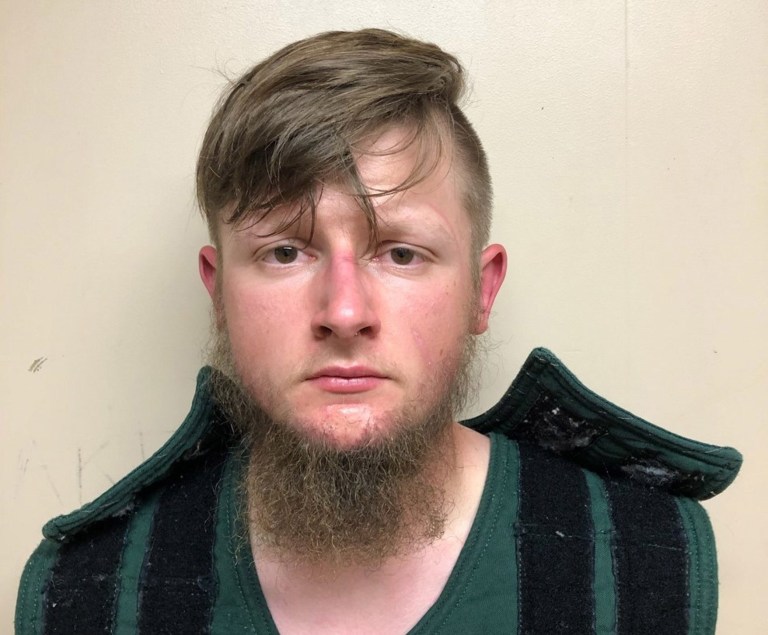 The 21-year-old arrested last night after a dramatic police car chase which resulted in the suspect’s car being shunted off the road (Picture: EPA) 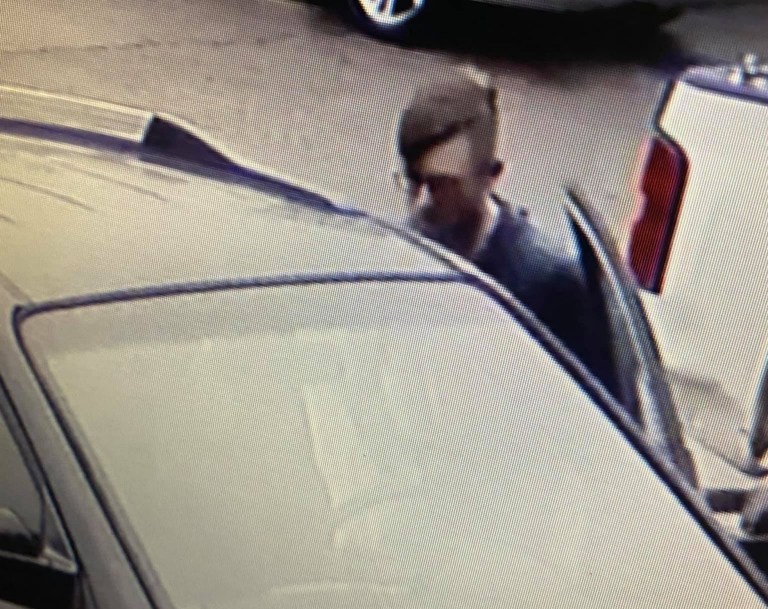 Mr Baker said five people were shot, where two people died at the scene. Three others were taken to hospital and two of them died there.

The shopping centre where Young’s Asian Massage is located was closed to the public while police officers investigated the scene.

He said the suspect was captured on CCTV pulling up to the business around 4.50pm, just minutes before the shooting.

It is thought from there the suspect drove 30 miles to two other businesses in the north-east of the city in the suburb of Woodland Hills. 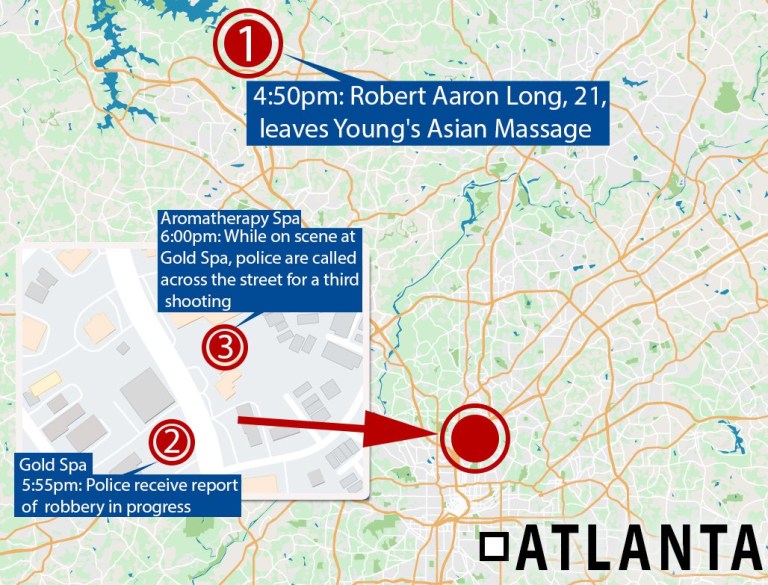 Map showing locations of the shootings around Atlanta, and where Long was spotted 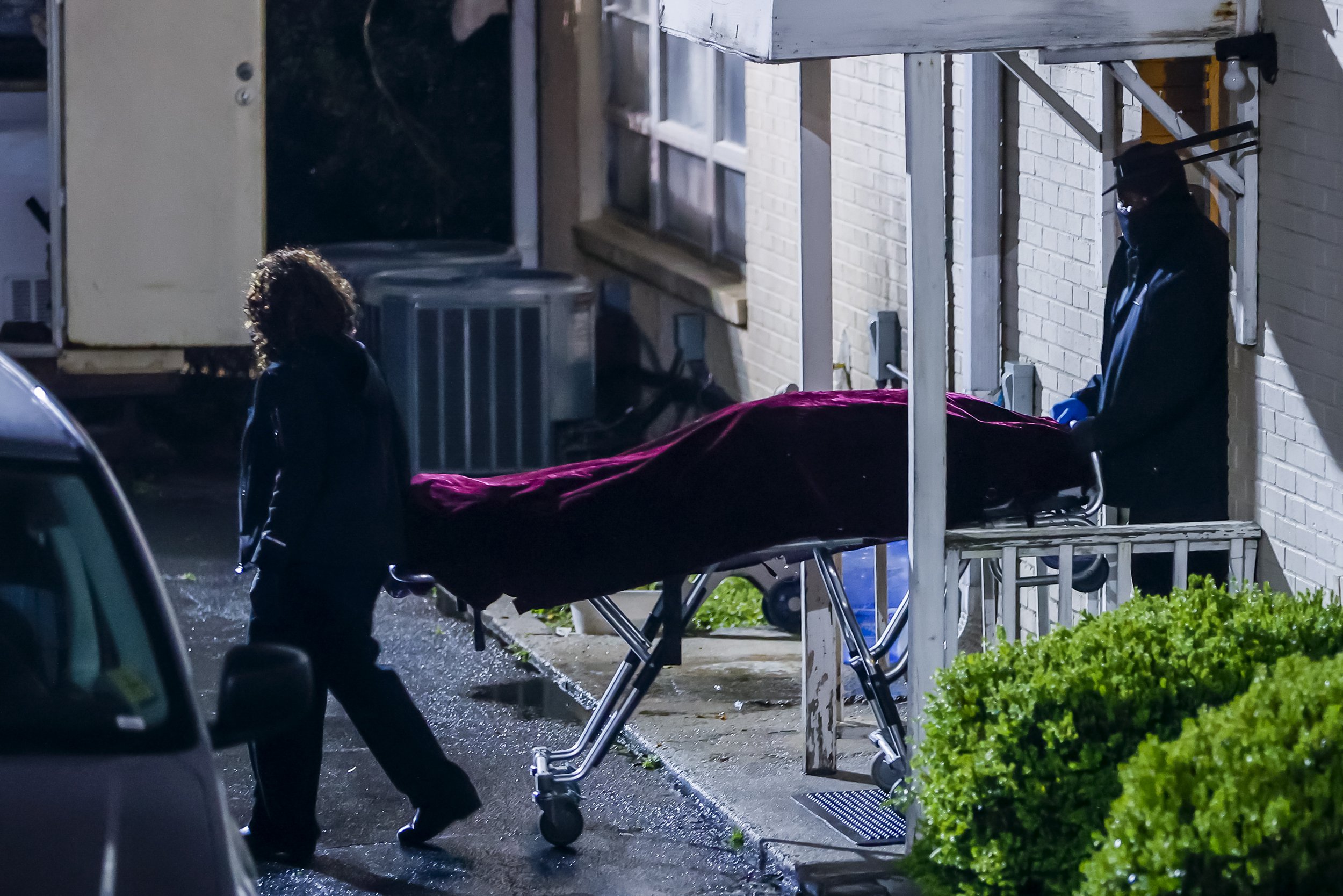 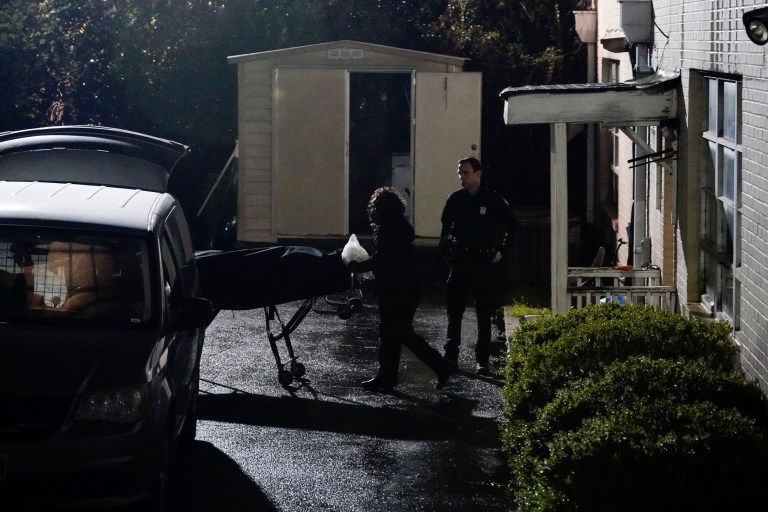 Atlanta Police chief Rodney Bryant said three people were killed at Gold Spa in Piedmont Road, while another was shot dead across the street at Aromatherapy Spa.

He said all four victims were female, and ‘it appears that they may be Asian’.

The second set of shootings occurred around an hour later, just before 6pm.

Police said they were called to Gold Spa to reports of a robbery – but when they entered they found three women who had all been shot and subsequently died from their wounds.

They rushed to Aromatherapy Spa directly across the street to find another woman had been shot and killed there.

The shootings, which officers are ‘very confident’ are linked, took place at parlours where a majority of the employees are Asian.

The roads remain closed with a heavy police presence in place. Chief Bryant added there is no immediate danger to the public.

Couple transform ‘total wreck’ of a house into their dream home