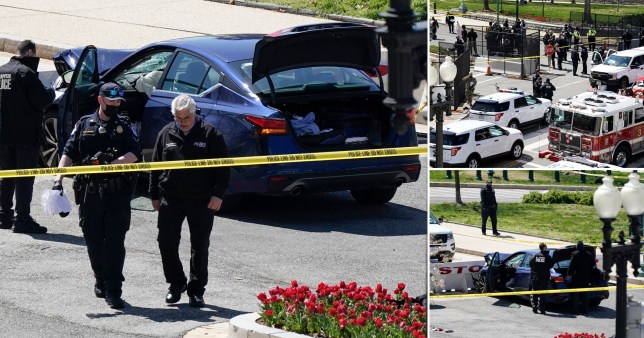 US Capitol Police in Washington, DC, responded to a report a vehicle that rammed into a barrier (Picture: Fox News/CNN)

A driver who rammed into a barricade by the US Capitol and injured two Capitol police officers was shot and killed, law enforcement and congressional officials said on Friday afternoon.

Two officers were injured after ‘someone rammed a vehicle’ into them, US Capitol Police said in a tweet.

A suspect was in custody and the individual and both officers were transported to the hospital, according to Capitol Police.

Law enforcement officials told the Associated Press that the suspect was shot and taken to the hospital in critical condition.

The crash and shooting occurred by the North Barricade vehicle access point along Constitution Avenue, which is a checkpoint near the Capitol in Washington, DC. The checkpoint is about 100 yards from the entrance on the Senate side of the Capitol building and is utilized by senators and staff on weekdays.

A video shared online showed a dark-colored sedan running into a barrier. Law enforcement officials and paramedics appeared to tend to at least one person. A police K9 could also be seen inspecting the car.

Police locked down the Capitol after a report of gunshots in the area, according to AP. 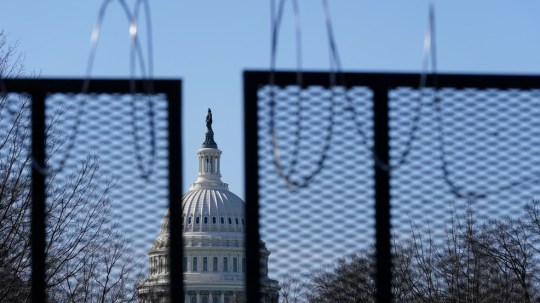 The US Capitol was on lockdown on Friday afternoon (Picture: AP)

All Capitol buildings were being locked down ‘due to an external security threat’ and staff members were not allowed in or out of the buildings, Capitol Police said.

Fencing that was erected around the Capitol building to block vehicular traffic following the Jan. 6 riot by former President Donald Trump’s supporters was recently removed.

Friday’s attack was the most serious security incident at the complex since thousands of MAGA fans stormed the Capitol in an attempt to stop Congress from certifying President Joe Biden’s victory. The insurrection resulted in five deaths and dozens of injuries.

Congress is on recess and Biden departed Washington, DC, earlier in the afternoon on Friday for Camp David.

Appears that a car smashed into the barrier. Two people are on stretchers. Canât see whether itâs an officer or civilian pic.twitter.com/Ud5WYGyKFu

Man reveals how to paint over anything WITHOUT using tape