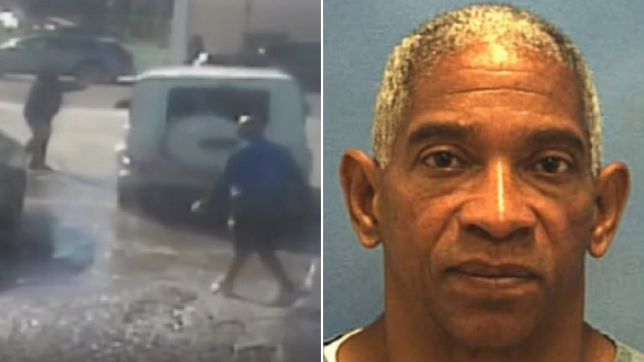 A driver who shot and killed an unarmed car thief he caught stealing his luxury Mercedes SUV will not be charged over the incident. Stephen Lott was cleared Monday over the December 2018 killing of Reyes Bermudez at a Miami Beach car.

Lott was told he would face no charges because of Florida’s Stand Your Ground self-defense law. Prosecutors declined to bring criminal charges after they were unable to disprove Lott’s claim to a cop that ‘I was in fear for my life and I shot.’

Lott was filmed running after Bermudez as the G-Wagen began to pull away. Surveillance video shows the car did not drive towards Lott, and that Bermudez had begun to turn the vehicle away from its owner when he was shot in the head.

That caused him to lose control of the Mercedes, which flew across the street and crashed into a parked car and building opposite.

Explaining the decision not to charge Lott, prosecutors said: ‘Mr Lott had the legal right to stand his ground and use deadly force to protect himself from death or great bodily harm while Mr Reyes Bermudez was committing and escaping from committing a forcible felony.’

They also said the stolen car was being driven at ‘a high rate of speed,’ that posed a threat to everyone in its immediate vicinity.

Last year, Bermudez’s nephew Keu Reyes was among those who condemned Lott’s actions.

Reyes told the Miami Herald: ‘It takes more time to take a gun out and aim and shoot than just to get out of the way of a running vehicle.’

Bermudez was a serial criminal with previous convictions for theft, robbery and aggravated assault, who had been jailed six times between 1987 and 2013.

Florida passed the Stand Your Ground law in 2005, which eliminates people’s duty to first try to retreat from a threat before using deadly force to counter it.

The law also gave judges more leeway to dismiss charges against suspects they believed had acted in self defense.

Critics say the law encourages vigilantism. Florida Democrats are pushing a bill to repeal the law, but Florida’s legislature is controlled by Republicans, who support it.

Can you legally leave the country during lockdown?