A man seen driving in reverse at 45 miles per hour on a highway insists he wasn’t trying to pull off a stunt, but rather simply save his own life. Nathanial Grayson was behind the wheel on State Route 16 in Washington state last week when he said his Chevy Malibu experienced a mechanical malfunction.

‘Turns out my car has this thing where the steering wheel locks up,’ Grayson told KIRO 7 News. ‘My life was, like, in danger. So I was driving as if I was driving with my life on the line.’

Grayson said his power steering locked up as he was cruising and he reacted by slamming his brakes, which caused him to spin out and hit a concrete barrier. Fortunately, he did not hit or get hit by any other vehicles, but he would up moving backwards. Then his steering wheel unlocked.

‘I see the exit sign and I was like, “You know what? I can probably make it to the exit,”’ Grayson said. ‘Time just slowed down, and I felt like I was in “The Matrix,” like, “I can do this.”’ 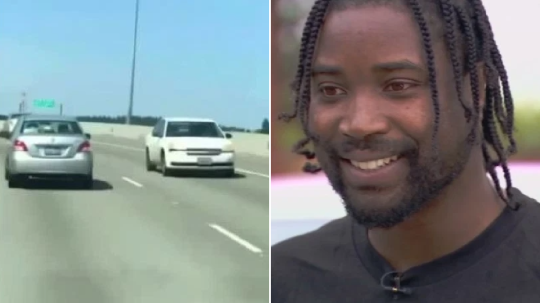 Nathaniel Grayson said he was driving on the highway when his power steering locked up, causing him to hit a concrete barrier and wind up backwards (Pictures: KIRO 7 News)

Grayson said he drove in reverse for about a minute, but that it felt much longer than that.

Some people who saw the video of his skilled maneuver called it a stunt. A Washington state trooper who watched the footage called it ‘unbelievable’.

But Grayson said he was not attempting to do anything but get out of the situation safely.

‘Really, I was just trying to save my life and make sure nobody else got injured,’ he said.

Owners of Chevrolet Malibus manufactured in the early 2000s have filed numerous complaints of power steering failure, which can lead to losing control of the car, according to the TV station that checked federal records. General Motors, which owns Chevrolet, recalled more than 1.3million vehicles in 2014 over power steering issues, and mid-2000s Chevy Malibus were among them.

Since maneuvering his way out of those fearful minutes, Grayson has laughed about the incident and embraced his new identity.

‘Yeah it was me,’ he said. ‘I’m Nathaniel Grayson and I’m the infamous drive-backwards-on-the-freeway guy.’